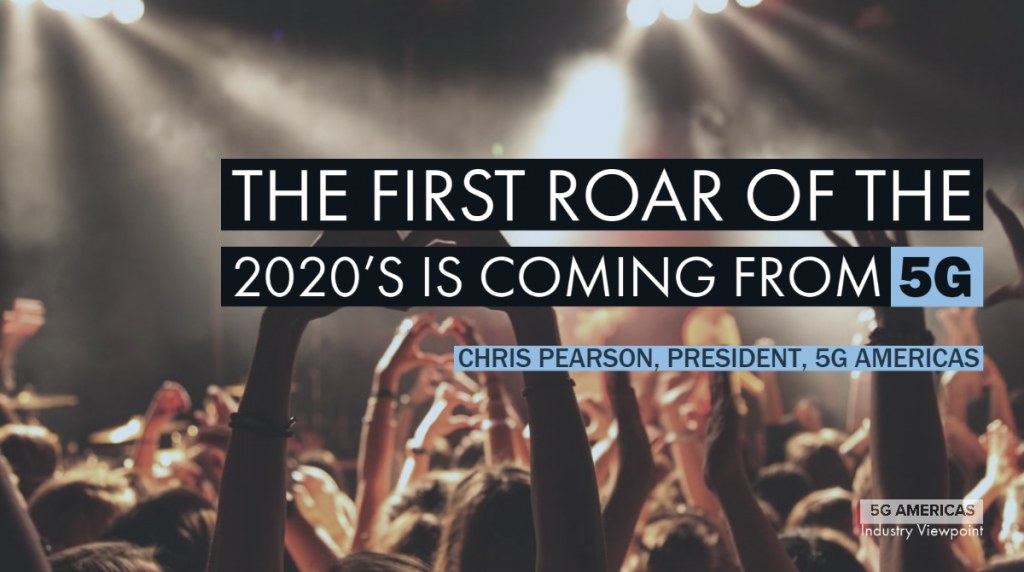 It’s no surprise to anyone that 2020 has been an extremely challenging year due to the global pandemic and resulting recession. However, bright spots have emerged in the economy, as wireless cellular networks have stepped up to keep people connected while they work remotely. Despite some possible supply chain challenges in certain areas of the world, the fifth generation of wireless cellular – “5G” – is setting the stage for this decade’s economic revival story.

The latest white paper by 5G Americas, Global 5G: Rise of a Transformational Technology, is produced by Rysavy Research and details how every ten years or so, a new generation of wireless cellular technology emerges. Initially launched in late 2018, 5G is breaking out in 2020, and the technology is positioned to revolutionize communications connectivity with the potential to affect almost every facet of our lives over the next 10 years.  Most of the early conversation has revolved around the incredible speed gains from 5G – with users experiencing speeds 10 times or more faster compared to 4G LTE networks (when accessing large swaths of spectrum).

These gains in throughput were primarily the result of international wireless cellular communications standards put forth by the Third Generation Partnership Project (“3GPP”) and accessing larger swaths of spectrum—sometimes never before utilized for cellular communications. As a result of 3GPP Release 15, which was completed in 2019, 5G networks were quickly established (even before late-breaking changes to Release 15 were approved).

However, what has been less obvious to the casual observer is that 5G networks also offer several other benefits, including much reduced network latency, an increase in the amount of devices that can be attached to the mobile network simultaneously, an increase in the speed that devices can travel while still remaining connected, and much higher bandwidth and capacity to handle traffic per square meter.

The result of these benefits is that network operators have been in a building frenzy for their 5G networks. Today, 5G is the fastest growing generation of wireless cellular networks, and deployments are accelerating in even in the midst of the global crises. As of August 2020, there were 105 5G network around the world, 162 commercially available 5G devices, and 5G subscribers are on track to exceed 238 million by the end of the year. In terms of subscribers, 5G achieved in four quarters what it took 4G LTE 10 quarters to achieve.

One chart from the 5G Americas Rysavy Research report explains why 5G networks have been so successfully adopted by network operators. It’s more efficient to deliver one gigabyte of data over 5G than it takes for 4G. That kind of cost efficiency is going to be necessary to keep up with the incredible demand for more data from users. For instance, in May 2019, Korea’s Ministry of Science and ICT reported that 5G users consumed 18.3 gigabytes per month compared to 9.0 gigabytes for 4G LTE users.

It’s clear that 5G is intensifying the role of wireless communications throughout virtually every aspect of society. According to Market Info Group, manufacturing will be the fastest growing 5G market from 2020-2028 with an astonishing CAGR of 134%. The global smart grid market alone is expected to grow from $23.8 billion USD to $61.3 billion USD.

Each of these new use cases will require a different ‘fit’ from wireless cellular networks – something which 5G can accomplish. Under a 4G LTE network, the key was high speed data connectivity. Just ensuring there was an internet connection was sufficient for most use cases at the time. But 5G unleashes a wide variety of new opportunities precisely because its architecture and technology enablers can tailor itself to the very specific needs of the user.

One key to understanding how 5G can accomplish this is understanding that 5G harnesses spectrum that was never before feasible to use. Spectrum used for 5G is typically understood to consist of three kinds: low-band (below 1GHz), mid-band (1GHz to 6GHz) and high-band (above 6GHz). Each type of spectrum has different propagation and data-carrying characteristics. The higher the frequency, the larger the swaths of spectrum are available for use and the higher speed throughput occur – however, the smaller the distance it can travel. Therefore, high-band spectrum is great for delivering lots of data, but doesn’t propagate as well as low and mid-band, so requires a lot of cell sites, usually in the form of “small cells.”

In 2020, the United States will have made some great strides in making available mid-band spectrum for commercial use.  5G Americas has advocated for years to have more spectrum including both mid-band and mmWave available for 5G!  The U.S. FCC recently completed its auction for the 3.550 – 3.7 GHz shared spectrum (“CBRS”), which could have an impact on private wireless networks used in facilities, factories and campuses. The federal government also announced the opening of 100 MHz of the upper part of the 3.1 – 3.55 GHz range for commercial use (3.45 – 3.55 GHz), which is used by government agencies. Also, at the end of the year, 280 MHz of the 3.7 – 4.2 GHz “C-Band” (3.7 – 3.98 GHz) used by satellite operators will also start to be auctioned for 5G network operators.

At the same time, 3GPP continues to make great strides in finalizing new enhancements to 5G technologies. 5G was fully specified in 3GPP Releases 15 and 16, which was just completed in June 2020 (3GPP 16).

However, technologies aren’t the only the things which are bringing about 5G networks. In fact, the entire architecture of wireless networks is undergoing a major re-model with 5G. One area that you might be hearing about are 5G non-standalone versus 5G standalone networks. There are typically two parts to any major network: the core network and the radio access network (RAN).

In the first iteration of 5G, network operators built out 5G NSA (non-standalone) networks which used a 5G RAN and a 4G LTE core (or “evolved packet core”). 5G NSA was great to get some of the functional improvements of 5G out the door. Wireless operators today are rapidly moving towards 5G standalone (‘5G SA’) networks, which will greatly enhance data throughput, reduce latency, and increase operational efficiencies for the whole system.

At the same time, the radio access network is also becoming more open, as sophisticated radio technologies are opening greater data throughput between the mobile device and the cell site. Open RAN now stands as one of the hot “topics” in wireless, as operators and equipment vendors weigh the pros and cons.  Other significant factors re-shaping the RAN include the operation of multiple cell types (ie., macro-cells, small cells, and pico cells), neutral-host small cells, massive MIMO, and beamforming.

Overall, 5G network architecture is a significant and innovative standard addressing existing and new market opportunities.  The move towards edge and cloud computing is fundamentally re-shaping the way wireless networks operate. Network function virtualization and software-defined networking, which separate user and control planes, are now beginning to morph into containerized micro-services. These cloud-based concepts are driving a major re-think of how networks could and should operate. At the same time, AI and machine learning are bringing increased intelligence to the network, which help the management of assets and data. Edge computing also makes a powerful statement, as compute resources are added to the edge of the networks, where users most need the data quickly.

Of course, one thing to mention is that 4G LTE continues to improve, grow subscriptions, and provide a mobile broadband foundation for 5G. The world’s most successful generation of wireless is continuing to see improvements with wider radio channels using carrier aggregation up to 640 MHz, even easier MIMO deployment, and improvements to latency performance. 4G LTE not only remains a robust communications standard and is critical for many public safety, emerging markets, and IoT uses for the foreseeable future.

So what does the rest of the decade look like for 5G and beyond? Quite exciting, really.

Radio evolution is going to continue getting better and better with increasingly dense MIMO arrays. We’re already starting to see some crazy stuff like 32×32 MIMO, but 5G standards already allow for 100×100. In addition to radio evolution, 3GPP Release 17 promises to bring together 5G NR multi-cast and broadcast capabilities that could fundamentally re-build the model of television from the ground up. Satellite connectivity is envisioned in upcoming releases, which will help to deliver 5G to rural areas to close the digital divide and provide coverage in remote areas and at sea. We’ve barely scratched the surface on network evolution, as AI and machine intelligence become distributed around the network – who knows what the machines will be able to tell us about how to run the Internet of the future?

Despite 2020’s tough challenges, 5G is looking like one of the most promising technologies for the decade ahead. Like those who enjoyed the roaring 20’s one hundred years ago, we have a great opportunity ahead of us to re-make and rebuild a new world that is based on increasing connectivity and intelligence. I can’t wait to see what the 2020’s has to offer. Stick around for more developments soon!

How is 5G transforming the global landscape?

Find out more about fifth generation wireless cellular networks are changing industries and technologies - and being changed by them.
Click Here