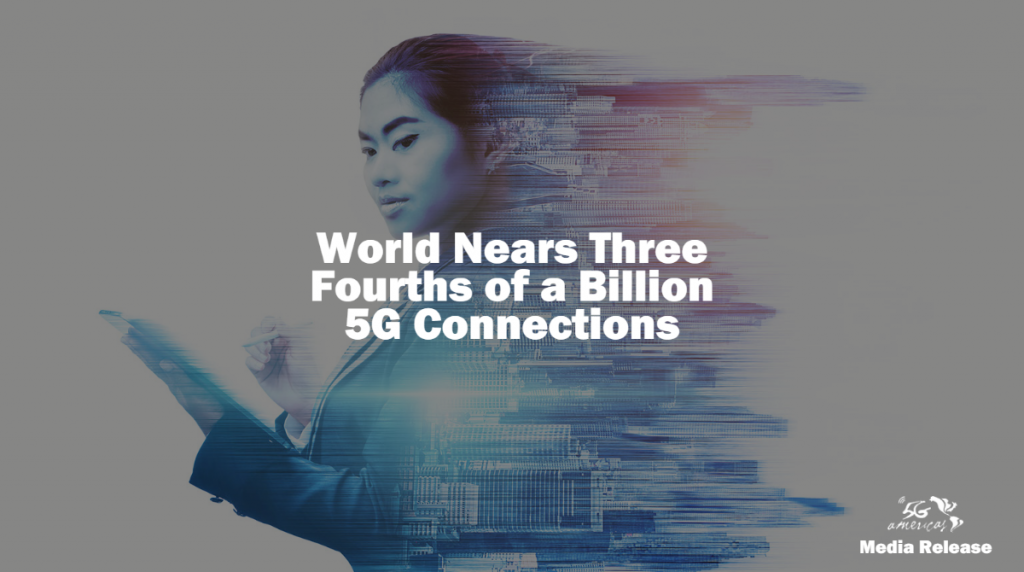 BELLEVUE, Wash. – June 21, 2022 – After three full years of growth, global wireless 5G adoption has reached a rapid acceleration phase, touching a noteworthy milestone of 701 million connections by the end of the first quarter of 2022. Omdia data forecast global connections will reach 1.2 billion by the end of this year, said 5G Americas, the wireless industry trade association and voice of 5G and LTE for the Americas.

Chris Pearson, President of 5G Americas said, “5G continues to be steadily rolled out in connected devices, coverage, and spectrum throughout the Americas in the beginning of a new era of innovation. Customers continue to rely on mobile communications networks and devices for new flexible work environments and social interactions during this pandemic.”

Omdia principal analyst Kristin Paulin said, “Oceania Eastern & South-Eastern Asia, and China in particular, continues to drive global trends, as this region accounted for 81.1% of all 5G subs at end-1Q22. After this, North America has the second largest share of 5G subs with 11.7% at end-1Q22.”

In comparison, 4G LTE is expected to remain the leading wireless cellular technology in Latin America and the Caribbean for now, as Omdia expects 4G LTE growth will remain strong in the region through the end of 2022. In Q1 2022, there were 506 million 4G LTE connections, representing 3.4 percent quarterly growth with the addition of 16.4 million new LTE subscriptions. That number is expected to reach 535 million, as 5G adoption begins to overtake 4G LTE by the end of 2022. Latin America and the Caribbean is projected to have 28 million 5G connections by year end of 2022, and 307 million by 2026.

According to Jose Otero, Vice President of Caribbean and Latin America for 5G Americas, “The pandemic heightened the significance of mobile wireless connectivity in our society. The importance of assigning new radio spectrum for additional new deployments will be critical to help the region to progress mobile broadband and recover from the economic and society challenges of the past few years.”

Overall, the number of 5G commercial networks globally has reached 224, according to data from TeleGeography and 5G Americas. That number is expected to reach 313 by the end of 2022 and 352 by the end of 2024, representing strong 5G network investment growth in many regions throughout the world. The number of 5G and 4G LTE network deployments are summarized below:

Visit www.5GAmericas.org for more information, statistical charts, infographic and a list of LTE and 5G deployments by operator and region. Subscriber and forecast data is provided by Omdia and deployment data by TeleGeography (GlobalComm).