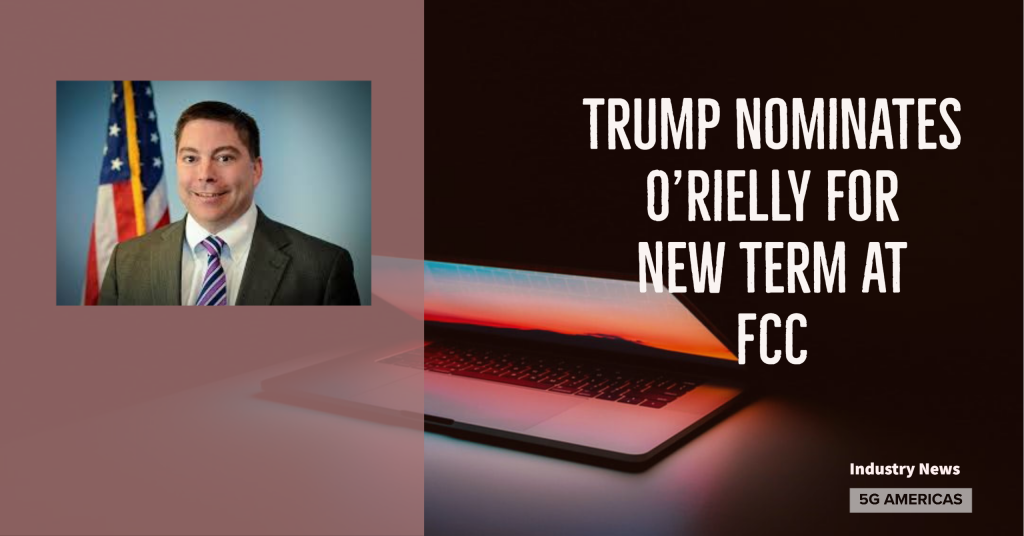 FCC Commissioner Michael O’Rielly is getting a round of applause from many corners after President Trump recommended he serve another term on the commission.

In wireless, O’Rielly has been FCC Chairman Ajit Pai’s point person on big and complex topics dealing with mid-band spectrum, including the Citizens Broadband Radio Service (CBRS) 3.5 GHz band and the C-band. The CBRS Priority Access Licenses (PALs) auction is scheduled for June 25, while a C-band auction is due to start December 8.

Pai issued a statement today congratulating his friend and fellow Republican colleague. “The President has made a wise choice,” Pai said. “Commissioner O’Rielly and I have worked side-by-side for over six years—he is not only a colleague, but a good friend. He’s made many contributions to the work of the Commission, from his leadership on 3.5 GHz spectrum policy to his unwavering advocacy against state misuse of 911 funding. And when we were in the minority, he consistently stood on principle while being pragmatic. I look forward to continuing to work with Commissioner O’Rielly to advance the public interest and hope the Senate will act quickly to confirm his nomination.”

CTIA issued a statement congratulating O’Rielly on his re-nomination. “Commissioner O’Rielly has been a champion for smart spectrum policies, ending 9-1-1 fee diversion and countless other important wireless and broadband issues. His dedication to understanding the details of issues, commitment to the value of competition, and strong sense of regulatory humility have benefited wireless consumers in the U.S. and across the globe,” stated CTIA President and CEO Meredith Attwell Baker.

O’Rielly also has been a big proponent of getting more unlicensed spectrum allocated for services like Wi-Fi. If approved by the Senate, his new term would end June 30, 2024; his term technically expired at the end of June 2019.

“Commissioner O’Rielly has been a staunch ally in opening up the spectrum to more unlicensed use, right-sized regulatory approaches for small companies, and bridging the digital divide by, among other things, ensuring that government subsidies connect Americans who truly lack broadband access first,” WISPA President and CEO Claude Aiken stated. “He is a tireless champion for getting all Americans online no matter where they live, and we greatly value his partnership, especially at it relates to helping more rural Americans obtain access to high-speed broadband.”