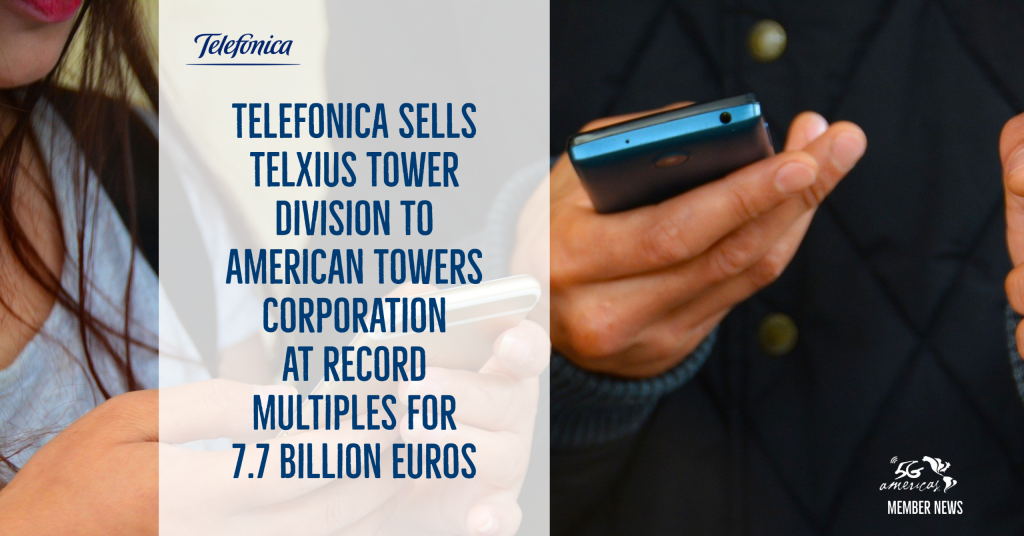 Madrid, January 13 2021.- Telefónica informs that, today, its subsidiary Telxius Telecom, S.A. (a company of the Telefónica Group minority-owned, directly or indirectly, by KKR and Pontegadea), has signed an agreement with American Tower Corporation (“ATC”) for the sale of its telecommunications towers division in Europe (Spain and Germany) and in Latin America (Brazil, Peru, Chile and Argentina), for an amount of [7.7 billion euros], payable in cash.

The agreement establishes the sale of a number of approximately [30,722] telecommunication tower sites and comprises two separate and independent transactions (on one hand, the Europe business and, on the other hand, the Latin American business), setting the respective closings once the corresponding regulatory authorizations have been obtained.

Among other aspects, the sale agreement provides for a commitment to the employment by ATC. On the other hand, the Telefónica Group operators will maintain the current leases agreements of the towers signed with the companies sold subsidiaries of Telxius Telecom, S.A., so that these operators will continue to provide their services in similar terms to the current ones. Renewal conditions do not include any additional “all or nothing” clauses.

The Telxius tower business generated an estimated OIBDAaL over the past twelve months of approximately EUR 190 mill. If such number is adjusted to consider the full impact of the German portfolio acquired by Telxius in June 2020, the implied multiple over OBIDAaL pro forma would be [30.5] times. The capital gain attributable to Telefónica is estimated to amount to approximately [3.5] billion euros. Once the transaction is complete, the Telefónica Group’s net financial debt will be reduced by approximately [4.6] billion euros and the leverage ratio (Net Debt/OIBDAaL) by approximately [0.3] times.

This operation is part of the Telefónica Group’s strategy, which includes, among other objectives, an active portfolio management policy of its businesses and assets, based on value creation and at the same time, accelerating the organic reduction of debt.

Focused on our ambitious goals.

The President of Telefónica, José María Álvarez-Pallete, said that “this is a deal that makes strategic sense within our roadmap. American Towers was our second supplier after Telxius”. He added that “after this great operation we will continue to focus on our most ambitious objectives: the integration of O2 with Virgin in the United Kingdom, the purchase of Oi mobile in Brazil and the reduction of debt”. Following this operation, American Tower becomes Telefónica’s leading supplier in both Europe and Latin America and maintains its status as a partner in strategic projects in Brazil, Argentina and Colombia.

This transaction is another relevant milestone in the way the future of the New Telefónica is being written, in line with the challenges posed by the new times, as a new changing world that demands anticipation and agility. Telefónica, once again, is looking for new formulas to manage resources in the most efficient way possible.

Telefónica is a company forged in change, focused on the execution and fulfillment of its commitments, and continues to execute its action plan as an accelerator of the company’s transformation, even more importantly in the current context. The agreement with American Tower fulfills the main objectives of the roadmap set out approximately a year ago: to boost opportunities with the greatest growth potential, leveraging the value of our infrastructures; to increase agility and improve efficiency; and to create value with a long-term sustainable model by achieving operational excellence.

The creation of Telefónica Infra was one of the main commitments acquired with the design of the New Telefónica, to bring to light the value of our assets and develop alternative models for the deployment of infrastructures that accelerate growth. This strategic business unit, which encompasses shareholdings in telecommunication infrastructure vehicles, providing service to both Telefónica’s operators and third parties, has confirmed the ambitious objectives that were set a year ago and corroborates the relevant role that it continues to be called upon to play.

Telefónica Infra, which had 50.01% of Telxius among its first and robust assets, shows that it is prepared to channel the increase in traffic and surface the value of a unique portfolio. The management team of this company will continue to focus on the development and monetization of towers, distributed antenna systems, data centers, greenfield fiber projects and submarine cables, among others.