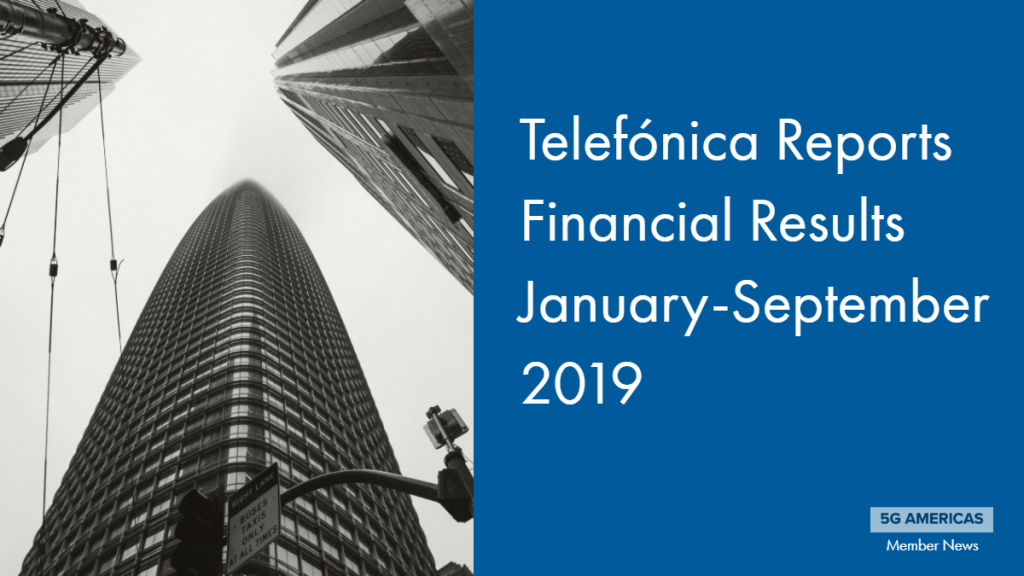 Telefónica accelerated revenue growth and earned €1,344m in the first nine months of the year

José María Álvarez-Pallete, Chairman and Chief Executive Officer: “Telefónica continued to post solid & profitable revenue growth in a quarter marked by a strong performance in our main markets, Spain, Brazil, Germany and UK. We continued to generate very strong free cash flow, up 40% year-on-year in the first nine months of 2019, driving a reduction in net debt for the 10th consecutive quarter.

We made good progress on key strategic initiatives to simplify our business this quarter, including a workforce restructuring program in Spain. We are forging ahead with plans to monetise further our mobile telco infrastructure, making a more efficient use of our networks by sharing them, whilst adding new partners to enrich the value of our commercial offer in the home.

Telefónica remained focus on deploying next generation networks in our markets, improving our 4G coverage and launching 5G selectively, as we have in the UK. Looking ahead, we reiterate our guidance for this year and are confident that our digital transformation will boost returns and deliver the best technological solutions for our customers.”

Financial results January-September 2019:
Telefónica today presented its results for the January-September period, which stand out for the return to reported growth in revenues in the third quarter, thanks to the improvement in Spain, Brazil and Germany, and the strong performance of the United Kingdom, despite of the negative impact of currencies. Telefónica advanced in the deployment of ultrafast networks and reduced net debt for the tenth consecutive quarter. The company reiterates all the objectives set for the year, as well as the dividend corresponding to 2019.

Focus on high customer value
Telefónica Group’s access base stood at 345.8m at September 2019, virtually stable y-o-y excluding changes in the perimeter. The continued quality improvement of the customer base explained the growth in average revenue per access (+4.3% y-o-y organic; +4.7% in January-September), while churn improved 0.2 p.p. both y-o-y and q-o-q.

Revenues coming from broadband connectivity and services beyond connectivity accounted for 55% of the total (+2 p.p. y-o-y), reflecting the transformation of the revenue mix and increasing business sustainability, while voice and access decreased by 3 p.p. to represent less than a third of the total.

In the third quarter, provisions for restructuring costs amounted to €1,876m (€34m in the same period of 2018), mainly in Spain (-€1,732M). These provisions did not impact free cash flow generation in the quarter and were carried out within the company’s transformation and simplification process, which shall enable the generation of incremental savings and efficiencies with a positive impact on cash generation.

Exchange rates negatively affected the Company’s reported results for January-September 2019, mainly due to the depreciation of the Brazilian real and the Argentine peso against the Euro. In the third quarter, foreign currencies reduced y-o-y revenue growth by 2.0 p.p. and OIBDA by 1.5 p.p. mainly due to the evolution of the Argentine Peso, though the trend improved sequentially on better y-o-y comparison of the Brazilian real against the Euro (-3.7 p.p. and -3.2 p.p. respectively in the first nine months).