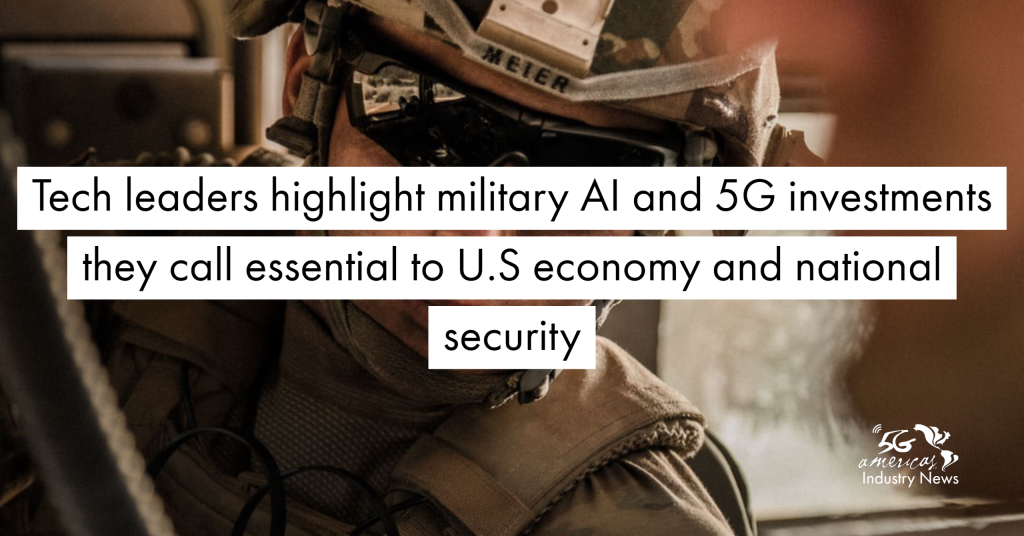 Some of the biggest names in AI at companies like Amazon, Google, and Microsoft are making recommendations about how the U.S. military and federal government should fund 5G adoption and AI initiatives as part of the forward-looking work of the National Security Council on AI (NSCAI).

The NSCAI gives a select group of tech executives agency to make recommendations with the power to affect not just military policy, but, with public-private partnerships, their own businesses as well.

The report makes more than two dozen preliminary judgments ranging from modifications to a military entrance exam to discovering AI talent to creating a national 5G strategy within 6 months as part of the next annual defense spending bill.

“It is a national security imperative for the U.S. military to have access to a powerful 5G network to enable future AI capabilities, and ensure the network is trusted to prevent competitors from accessing our AI systems,” the report reads.

The report frames 5G as an adjacent technology to AI and ML. For that same reason, biotechnology and quantum recommendations will also be part of the final report, which is due out in March 2021. But this quarterly report includes recommendations on issues like 5G that NSCAI commissioners believe deserve action now, and it underscores the importance of doing so.

The report also calls for an expansion of 5G spectrum sharing between private businesses and the U.S. military, and for Congress to pass the $750 million USA Telecommunications Act to encourage 5G research and development and open up access to radio networks. Quick action is called for, the NSCAI Commission said, to compete with Huawei.

“5G networks will form the connective tissue between AI platforms. Ensuring the United States maintains access to trusted and robust 5G networks is a critical component of overall leadership in AI. This is particularly true as microelectronics continue to advance, and the capability to run sophisticated AI models at the edge will increase. As AI becomes more dispersed throughout the network, the need for a secure and effective 5G network will increase even more,” the Commission said in the report.

The report also emphasizes the need for military and federal government funding to produce, assemble, and test semiconductor hardware like FPGAs, GPUs, and ASIC chips. The Commission prescribes simultaneous creation of government pathways to trusted, state-of-the-art integrated circuit chips and continued investment in microelectronics to ensure progress despite the slowdown of Moore’s law. To accomplish this, the Commission says Congress should invest $500 million in DARPA’s Electronics Resurgence Initiative and $100 million in the U.S. Navy’s Trusted and Assured Microelectronics program and State-of-the-Art Heterogeneously Integrated Packaging (SHIP).

“At present, the U.S. government does not have trusted access to state-of-the-art microelectronics manufacturing,” the report reads. “With an additional $50 million, SHIP could expand the existing pilot prototype program to include heterogeneous integration of multi-chip packages incorporating AI specific chips and configurations.”

The report acknowledges that the United States has enjoyed a strategic advantage in chips since the field was created decades ago but says that advantage is eroding, and that risk related to the semiconductor supply chain in the U.S. is on the rise.

Related to the Navy’s trusted microelectronics programs, the report states, the Office of the Director of National Intelligence (ODNI) has assessed ways private semiconductor companies can work with the government to establish state-of-the-art semiconductor design.

“While building a cutting-edge, high-capacity semiconductor fabrication plant for dedicated-government use would likely cost approximately $20 billion, the ODNI approach calls for a security-based split-manufacturing facility and partnering with a private sector firm to build a facility, which would produce both commercial use and government-use chips,” the report reads.

Leading up to a final report scheduled to be sent to Congress next year, the NSCAI Commission said this week it now plans to release quarterly reports on how the U.S. military and intelligence agencies can prepare for a future of algorithmic warfare or otherwise use AI for their purposes. A draft NSCAI draft report released last fall asserted that AI supremacy is essential to U.S. national security and economic might.

On matters of privacy and ethics, the Commission singles out Clearview AI, a company that scraped billions of images from the web to create a facial recognition system, as an example of invasive AI-powered tech that should be avoided. Tech companies that track the location of individuals — including the employers of some commission members — was also mentioned as problematic.

“These developments only confirm that we need to develop best practices, policies, and laws aimed at ensuring the responsible development and fielding of AI-enabled systems and tools consistent with democratic norms and values,” the report reads.

The Commissioners, and a staff of experts advising their work, said they switched to a quarterly approach in order to inform elected officials like the president and Congress about issues that deserve near-term or immediate action, like 5G competition with China.

“The NSCAI is on track to submit its final report in March 2021. However, the pace of AI development, the geopolitical situation, and the relevant authorization and budget timelines in 2020 represent important opportunities for the Commission to contribute to ongoing efforts to foster research and development, accelerate AI applications, and responsibly grapple with the implications of AI for our security, economy, and society.”

The report makes a single mention of coronavirus, citing the global pandemic as a reason the Commission must remain flexible and act fast. Like AI, defense officials have referred to COVID-19 as a national security threat.

The Commission will share a series of recommendations deemed classified with executive and legislative branches of government related to specific threats to the United States from foreign state and non-state actors. The laundry list of funding requests in the report could face some obstacles in the future. As the U.S. and global economy continue to falter, economists expect that a recession in the months ahead may lead to the largest reduction in U.S. GDP production since World War II.

Original link to the article