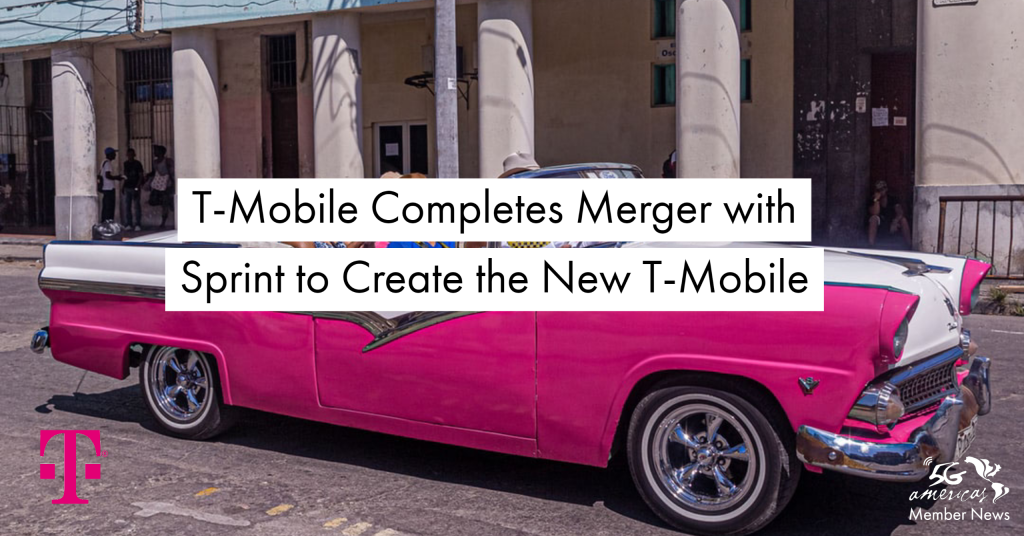 Bellevue, Washington and Overland Park, Kansas – April 1, 2020 – T-Mobile US Inc. (NASDAQ: TMUS) announced today that it has officially completed its merger with Sprint Corporation to create the New T-Mobile, a supercharged Un-carrier that will deliver a transformative 5G network. The parent of the combined company is T-Mobile US, Inc., whose shares of common stock will continue to trade on the NASDAQ Global Select Market under the symbol “TMUS”. The combined company will operate under the name T-Mobile.

The New T-Mobile’s commitment to building the world’s best broad and deep nationwide 5G network, which will bring lightning-fast speeds to urban areas and underserved rural communities alike, is more critical than ever, as reliable connectivity has become so important to Americans. With 14 times more capacity in six years than standalone T-Mobile has today, the New T-Mobile network will be able to offer unmatched value to consumers, with better service at lower prices. The company will also continue to focus on its commitment to customers and being a force for good. The enhanced scale and financial strength of the combined company will drive a planned investment of $40 billion into its network, business and more over the next three years. Synergies achieved from the integration have the potential to unlock massive scale and unleash at least $43 billion in value for shareholders.

The company also announced that with close of the merger, it has successfully completed its long-planned Chief Executive Officer transition from John Legere to Mike Sievert ahead of schedule. Effective immediately, Sievert will assume the role of CEO of T-Mobile. Legere, who served as CEO of T-Mobile since 2012, built a culture around listening to employees, putting the customer first and shaking up the market with signature Un-carrier moves. During his tenure, Legere engineered a turnaround of the company as T-Mobile completely disrupted the wireless industry and became the fastest growing company in wireless, capturing 80% of the industry’s postpaid phone growth from 2013 to today. Legere will continue as a member of the Board of Directors for the remainder of his current term, through the Annual Meeting of Shareholders scheduled in June 2020.

“During this extraordinary time, it has become abundantly clear how vital a strong and reliable network is to the world we live in. The New T-Mobile’s commitment to delivering a transformative broad and deep nationwide 5G network is more important and more needed than ever and what we are building is mission-critical for consumers,” said Mike Sievert, president and CEO of T-Mobile. “With this powerful network, the New T-Mobile will deliver real choice and value to wireless and home broadband customers and double down on all the things customers have always loved about the Un-carrier. T-Mobile has been changing wireless for good — and now we are going to do it on a whole new level!”

Sievert continued, “All of us at T-Mobile owe John an incredible thank you for everything he’s done to get this company to where we are today. He has changed what it means to be a CEO. Everything that T-Mobile has accomplished is the result of his vision for what a different kind of wireless provider could be. John IS what the Un-carrier is all about: advocating for customers at every turn, forcing us to think differently and always driving for more. He has always pushed the boundaries of what’s possible and pushed us to do the same. His leadership has made us what we are today, and we will take that into the future. Thank you, John, for everything you’ve done for wireless consumers and for our beloved employees! I also want to thank Marcelo Claure and the entire Sprint leadership team for their hard work to get us to this huge day! We did it!… and I’m looking forward to welcoming Sprint employees into Team Magenta, and to working with you now as a member of our Board of Directors.”

“The Un-carrier movement started with T-Mobile saying we were going to shake up wireless — and we did! We eliminated annual service contracts, overages and roaming fees, improved customer service and introduced more value. But there’s more. In the best and worst of times, T-Mobile has been here with a dependable network and giving customers best-in-class customer service they can depend on. Today, when those connections are needed more than ever, we are reinforcing everything we’ve stood for as the supercharged New T-Mobile!” said John Legere. “You know T-Mobile has been all about challenging the status quo … and Sprint has a track record of being a tenacious challenger and a dedicated customer advocate as well. So, with innovation, disruption and obsession for the customer experience as the foundation that the New T-Mobile is built on, just imagine what’s to come.”

Legere continued, “I’ve been fortunate enough to lead this company for the past seven years, but now it’s time for me to hand the reins over to Mike Sievert. The Board of Directors and I agree that it makes perfect sense for Mike to assume his leadership role on day one of the new company. He’s ready! I had originally planned to stay on through the end of my contract on April 30, 2020, but it makes much more sense to transition this responsibility to Mike today. Mike was the first person I hired at T-Mobile and I have tremendous faith in his ability to take the Un-carrier into its next SUPERCHARGED chapter. Between his leadership, his expanded and talented leadership team and the amazing people at T-Mobile, the future is SO bright! The Un-carrier that we created started with our employees. Each and every one of them. They are different. They play the game differently, and I love them all. I cannot wait to see what this entire team does next!”

THE WORLD’S MOST TRANSFORMATIVE NETWORK

Strong, dependable network connectivity has never been more critical to customers or to the country. Now the New T-Mobile will focus on creating a much-needed transformational nationwide 5G network, driving innovation in the U.S. and bringing wireless access to people throughout the country. This quantum leap forward can only be achieved by using T-Mobile and Sprint’s combined low-, mid- and high-spectrum bands — and only the New T-Mobile will have the resources to do it quickly.

“The network is at the core of everything we do as a business, and it’s critically important for keeping customers connected to each other, their communities and the world,” said Neville Ray, president of Technology at T-Mobile. “The supercharged 5G network that we’ll build as a combined company will be a huge step forward, transforming wireless, fueling innovation and delivering new experiences for customers all across the country that we can’t even imagine today.”

With 14 times more total capacity in the next six years than T-Mobile has today, customers won’t have to choose between great service or low prices — they’ll get both. The New T-Mobile will offer free access to 5G and the best rate plans at low prices, now and in the future, so all customers can reap the benefits of a supercharged Un-Carrier network at a great value. And the New T-Mobile has committed to delivering the same or better rate plans for three years, which includes access to 5G, including for prepaid and Lifeline customers.

Backed by that additional capacity, the New T-Mobile is also taking the fight beyond wireless. By offering an alternative to in-home broadband, the Un-carrier will provide much-needed competition in home internet to Big Cable, at a time when just under half of the country’s households have only one or zero options for high-speed broadband. The New T-Mobile’s wireless in-home broadband service will overcome the obstacles to extending traditional wireline access by blanketing high-capacity coverage over previously difficult to serve areas. Its network will deliver 100+ Mbps speeds for wireless broadband to 90% of the population and offer in-home service to millions of the country’s households in the next six years.

A BRAND THAT CUSTOMERS LOVE

New T-Mobile will capitalize on the winning formula it built and double down on what customers love about the brand. It will also continue to be a force for good, pledging not only to be a bigger company but also a better company.  New T-Mobile customers should expect everything the Un-carrier has ALWAYS stood for: treating customers right, shaking up the status quo and being a force for good. The company will use its network to lift up communities nationwide and bring the benefits of 5G to as many Americans as possible, and it will continue supporting the programs and causes that matter most to employees and the communities they serve.

It began with the T-Mobile Connect plan. To address America’s urgent needs around COVID-19, T-Mobile fast-tracked its groundbreaking, lowest-priced plan EVER, launched on March 23. Other initiatives to bring the New T-Mobile’s newly expanded network capabilities to the customers and communities that can benefit most will launch soon, including the Connecting Heroes Initiative to offer FREE unlimited talk, text and smartphone data to ALL first responders at ALL public and nonprofit state and local fire, police and EMS agencies; and Project 10Million, delivering free internet access and hardware to 10 million households over the next five years.

New T-Mobile customers will also receive industry-leading customer care, and all post-paid customers will have access to T-Mobile’s award-winning Team of Experts (TEX) model as it expands into every current and planned customer experience center.

The combined assets of T-Mobile and Sprint are so complementary that the merger is expected to unlock at least $43 billion in synergies for all shareholders. The vast majority of synergies in this deal come from combining networks, such as reducing redundant cell sites and rapidly deploying spectrum and other technologies more efficiently. The company plans to deliver a seamless, high-quality integration, just as it did with its MetroPCS merger, which was completed a year earlier than planned. These synergies and our combined scale are expected to put New T-Mobile in an enhanced financial position, including significant free-cash flow, margin expansion and strong, flexible capital structure.

Effective at the beginning of today’s trading session, T-Mobile will trade on the NASDAQ on a combined basis under the ticker symbol “TMUS.” The Sprint shares will no longer trade on the New York Stock Exchange.

Link to the original press release