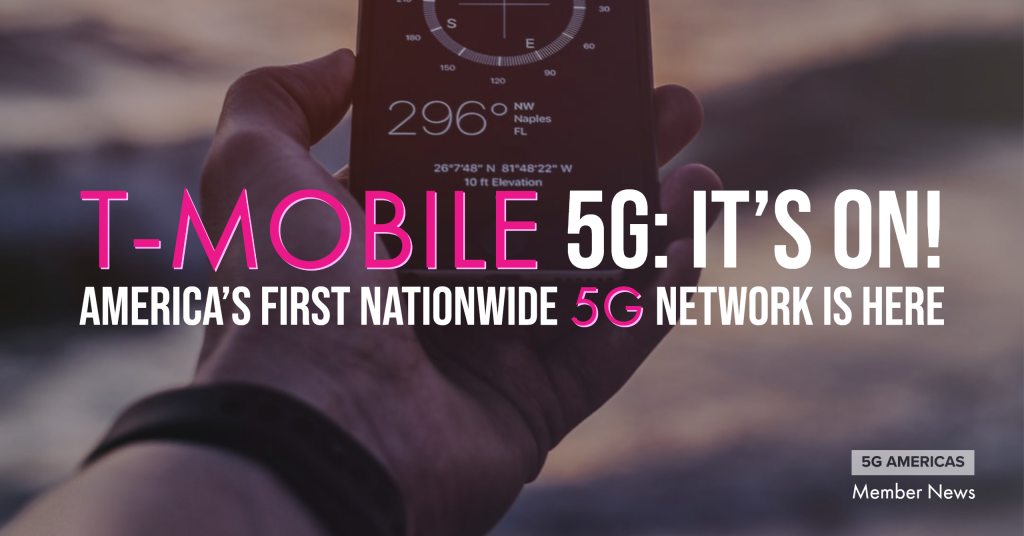 T-Mobile lights up the first nationwide 5G network, first nationwide prepaid 5G with Metro by T-Mobile and first 5G devices that work nationwide, ushering in a new era of 5G accessibility and affordability in first step toward 5G for All with New T-Mobile.

This holiday season, get a FREE 5G phone when you switch to T-Mobile.

What’s the news
America gets its first nationwide 5G network today, covering more than 200 million people and more than 1 million square miles, marking a critical first step and foundation for the New T-Mobile.

Why it matters
5G on 600 MHz spectrum goes far beyond the limitations of the carriers’ 5G. With clear 600 MHz spectrum reserved for 5G, T-Mobile is uniquely positioned to deliver 5G that covers more people in more places. Together with Sprint, the New T-Mobile has even bigger plans to supercharge 5G, with a broad and deep network for all Americans.

Who it’s for
Early adopters looking for a cost effective 5G phone that will work indoors and out, across the country.

Bellevue, Washington — December 2, 2019 — It’s on! T-Mobile (NASDAQ: TMUS) today lit up the country’s first nationwide 5G network, covering more than 200 million people and more than 5,000 cities and towns all across the country. Today’s launch immediately catapults T-Mobile into the leadership position as the country’s biggest 5G network, covering more than 1 million square miles, much of that in rural America. But today is just the start. If the merger with Sprint closes, the New T-Mobile will be able to build on this foundation to deliver transformational broad and deep 5G for All.

Two new 5G superphones, the exclusive OnePlus 7T Pro 5G McLaren and the Samsung Galaxy Note10+ 5G, are available for pre-order today at www.t-mobile.com/devices/5g-phones and in T-Mobile stores on December 6. Both 5G superphones tap into the Un-carrier’s 600 MHz 5G network where available and T-Mobile’s advanced nationwide LTE network elsewhere. Plus, both are ready to use Sprint’s 5G spectrum (2.5 GHz) when available from the New T-Mobile if the merger closes. To celebrate the launch, customers can get the OnePlus 7T Pro 5G McLaren for FREE with 24 bill credits when they switch to T-Mobile and trade in an eligible phone … or, get a Note10+ 5G for FREE with 24 bill credits when they buy another and add a line (two for new customers).

Metro by T-Mobile will launch America’s first nationwide prepaid 5G on December 6. Because what good is advanced technology if not everyone — absolutely everyone — can get it?

“5G is here on a nationwide scale. This is a HUGE step towards 5G for All,” said John Legere, CEO of T-Mobile. “While Dumb and Dumber focus on 5G for the (wealthy) Few, launching in just a handful of cities — and forcing customers into their most expensive plans to get 5G — we’re committed to building broad, deep nationwide 5G that people and businesses can access at no extra cost with the New T-Mobile … and today is just the start of that journey.”

“The carriers have been over-hyping 5G for years now, setting expectations beyond what they can deliver. When Verizon says #5GBuiltRight, they must mean sparse, expensive and limited to outdoors only,” said Neville Ray, T-Mobile President of Technology. “Meanwhile at T-Mobile, we built 5G that works for more people in more places, and this is just the start. With the New T-Mobile, we’ll see 5G speeds follow the same path as LTE, increasing exponentially over time. Plus, real broad and deep 5G will unleash whole new categories of innovation that will touch almost every area of the economy. The 5G future is bright, and it starts today.”

Of course, T-Mobile has published an interactive, zoomable 5G map at www.t-mobile.com/5Gmap, so customers can see exactly where they’ll get 5G coverage, down to their neighborhoods. For months (231 days, to be exact), Verizon refused to publish 5G coverage maps, until the Un-carrier forced them to do so with a relentless VerHIDEzon.com campaign aimed at ensuring greater carrier transparency.

T-Mobile is starting by building a 5G foundation with broad nationwide access for more people in more places. Together with Sprint, the New T-Mobile will have the ability to complete the picture, adding critical depth with mid-band spectrum for broad coverage and performance as well as millimeter wave spectrum for hotspot-like coverage in dense urban areas. Only this combination will deliver a 5G network with both breadth and depth, something the carriers simply cannot do as quickly.