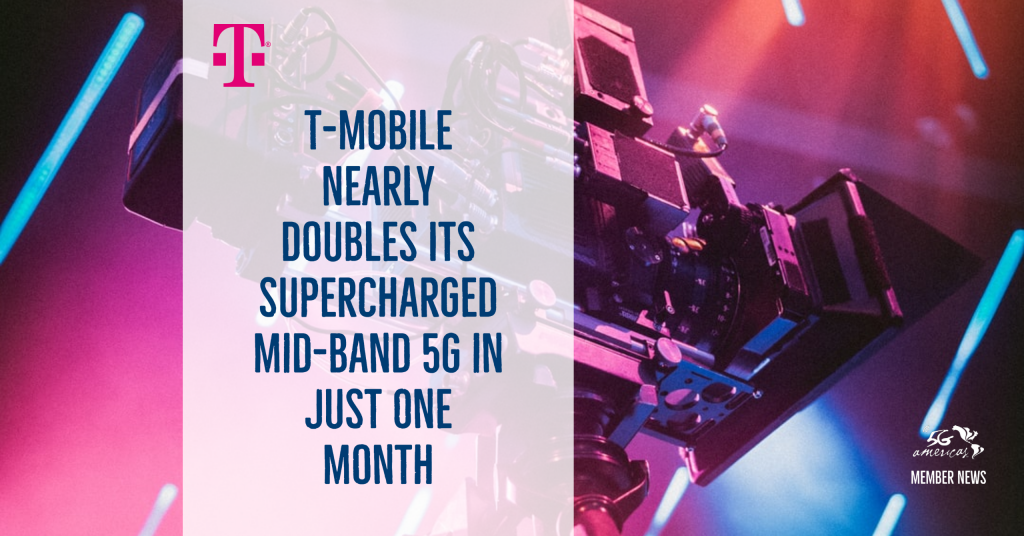 What’s the news: In just one short month, T-Mobile has nearly doubled the number of cities and towns that have the Un-carrier’s supercharged 5G experience (mid-band 2.5 GHz). The Un-carrier has plans to reach 100 million people with mid-band 5G by end of the year.

Why it matters: Mid-band 2.5 GHz 5G is the “goldilocks” 5G spectrum, delivering a perfect mix of coverage and speed, and T-Mobile has more of it than anyone in the US. Un-carrier customers with capable 5G devices immediately see benefits when a tower gets upgraded in their area.

Who it’s for: Wireless customers and businesses who want the best 5G experience on America’s largest 5G network.

BELLEVUE, Wash. — October 28, 2020 — Largest 5G network? Check. Blazing fast speeds customers can actually find? Check. T-Mobile (NASDAQ: TMUS) today announced it has nearly doubled the number of cities and towns that get supercharged mid-band 5G, adding even more capacity and superfast speeds to America’s largest nationwide 5G network. Mid-band 2.5 GHz 5G delivers both broad coverage and fast speeds at the same time — and it can even go through walls (looking at you, mmWave!). In places it’s deployed, average download speeds are already around 300 Mbps — that’s 7.5x faster than today’s average LTE speeds — with peak download speeds up to 1 Gbps. With today’s announcement, T-Mobile mid-band 5G reaches nearly 410 cities and towns across the country. The Un-carrier is rolling out mid-band 5G at a furious pace, with plans to cover 100 million people by the end of the year.

“Mid-band is the only way to deliver super-fast 5G speeds that can reach for miles. And here’s the secret AT&T and Verizon don’t want you to know: T-Mobile is the only one with big swaths of mid-band dedicated to 5G. T-Mobile has more mid-band spectrum than anyone else,” said Neville Ray, President of Technology at T-Mobile. “We’re the only ones building a transformational 5G network built on dedicated — not shared — airwaves. And that means only T-Mobile is capable of making the world’s best 5G network a reality.”

Why Mid-band for 5G?

Mid-band spectrum is the 5G spectrum. It combines massive capacity with far-reaching coverage to bring game-changing performance to more people across the country. Mid-band 2.5 GHz 5G delivers blazing fast speeds that can rival millimeter wave, but unlike mmWave, mid-band can blanket large areas with needed coverage and go through walls, windows and trees. Which means it’s a more practical 5G technology.

“When it comes to real-world 5G, the only way to get the kind of performance benefits we’ve been promised is through the critical mid-band spectrum,” noted Bob O’Donnell, President of TECHnalysis Research. “Sure, mmWave can be fast, but it’s nearly impossible to find, while low-band 5G is easy to find, but offers smaller improvement over existing LTE. With the 2.5 GHz spectrum being lit up by T-Mobile, however, you get the sweet spot of noticeably improved performance in a respectable coverage area. That’s the kind of 5G benefit that consumers are going to notice and appreciate.”

T-Mobile has America’s largest 5G network and it’s only getting better as the Un-carrier deploys more mid-band spectrum from Sprint. T-Mobile’s 5G network covers more than 7,500 cities and towns across nearly 1.4 million square miles of the U.S. That’s more square miles of 5G coverage than Verizon and AT&T combined – 3.5x more than Verizon 5G and 2x more than AT&T. T-Mobile has pioneered a distinctive ‘layer cake’ strategy to deliver a transformative, nationwide 5G network for all: dedicated spectrum across all three layers of 5G — low for far and wide coverage indoors and outside, mid for broad coverage and blazing fast speeds and high for super-fast speeds over shorter distances— for the best 5G experience.

T-Mobile is the only one building 5G with dedicated spectrum across all three bands, which is important since 5G phones will use a lot of capacity. T-Mobile has wide open freeways ready to take on massive amounts of 5G traffic while Verizon and AT&T have to steal LTE spectrum from their existing customers to broaden their 5G coverage. Using Dynamic Spectrum Sharing (DSS), Verizon forces 5G and LTE customers to share bandwidth, splitting up the capacity so each technology only gets part of it, taking capacity away from their current smartphone customers and increasing congestion.

Now with mid-band spectrum, T-Mobile is building on its nationwide 5G foundation, increasing capacity and boosting speeds for customers. And it’s rolling out at lighting speed across the country. Engineers are lighting up 1,000 sites per month with 2.5 GHz 5G and T-Mobile has plans to cover 100 million people with mid-band 5G by the end of the year.

For more information on T-Mobile’s network, visit www.t-mobile.com/coverage/4g-lte-5g-networks. And follow T-Mobile’s Official Twitter Newsroom @TMobileNews to stay up to date with the latest company news.

About T-Mobile
T-Mobile U.S. Inc. (NASDAQ: TMUS) is America’s supercharged Un-carrier, delivering an advanced 4G LTE and transformative nationwide 5G network that will offer reliable connectivity for all. T-Mobile’s customers benefit from its unmatched combination of value and quality, unwavering obsession with offering them the best possible service experience and undisputable drive for disruption that creates competition and innovation in wireless and beyond. Based in Bellevue, Wash., T-Mobile provides services through its subsidiaries and operates its flagship brands, T-Mobile, Metro by T-Mobile and Sprint. For more information please visit: http://www.t-mobile.com.