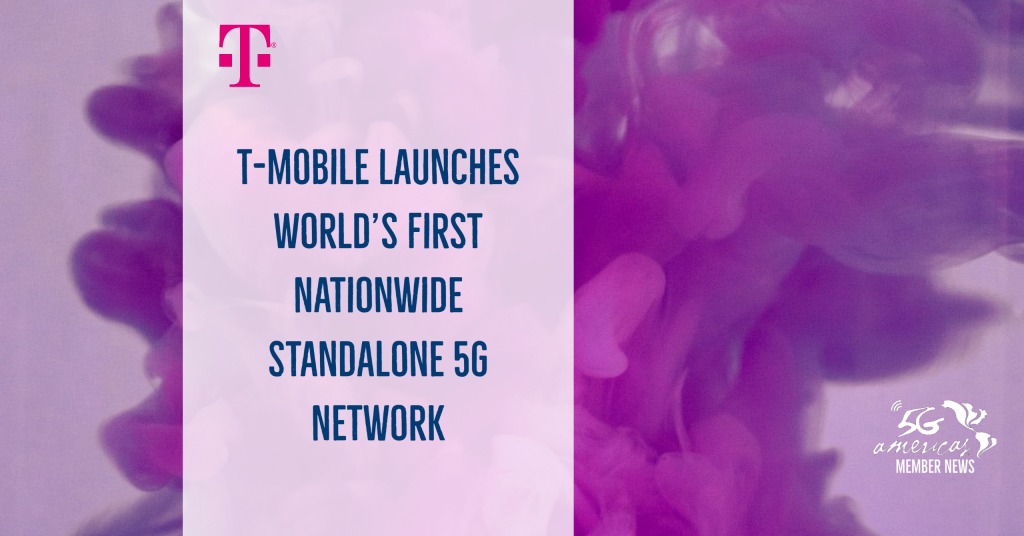 BELLEVUE, Wash. — August 4, 2020 — This is some next level 5G. T-Mobile (NASDAQ: TMUS) announced today it is the FIRST IN THE WORLD to launch a commercial nationwide standalone architecture (SA) 5G network. The move immediately expands the Un-carrier’s 5G footprint — already the nation’s largest — to nearly 2,000 additional cities and towns, brings 5G deeper into buildings and sets the stage for future groundbreaking applications. In other words, SA 5G is the future, and T-Mobile is leading the charge to bring it to life.

To celebrate the milestone and the arrival of 5G for the first time in hundreds of small towns across America, T-Mobile used drones to light up the sky over Lisbon, ND, letting people in the small town know “5G is here”. The Un-carrier plans similar celebrations in the future. Check it out in the video below:

“Since Sprint became part of T-Mobile, we’ve been rapidly combining networks for a supercharged Un-carrier while expanding our nationwide 5G footprint, and today we take a massive step into the future with standalone 5G architecture,” said Neville Ray, President of Technology at T-Mobile. “This is where it gets interesting, opening the door for massive innovation in this country — and while the other guys continue to play catch up, we’ll keep growing the world’s most advanced 5G network.”

Taking 5G Next-Level
The first phase of 5G has focused on delivering new 5G radio capabilities while leveraging existing LTE core networks and has been key in accelerating 5G deployment. Now T-Mobile’s new 5G core is coming to life, which in the future can unlock blazing fast speeds in more places, real-time responses and massive connectivity. SA, especially when coupled with core network slicing in the future, will lead to an environment where transformative applications are made possible — things like connected self-driving vehicles, supercharged IoT, real-time translation … and things we haven’t even dreamed of yet. In SA areas, T-Mobile engineers have already seen up to a 40% improvement in latency during testing, and that is just the beginning of what can be done with Standalone 5G.

In the near-term, SA allows T-Mobile to unleash its entire 600 MHz footprint for 5G. With non-standalone network architecture (NSA), 600 MHz 5G is combined with mid-band LTE to access the core network, but without SA the 5G signal only goes as far as mid-band LTE. With today’s launch, 600 MHz 5G can go beyond the mid-band signal, covering hundreds of square miles from a single tower and going deeper into buildings than before. Thanks to T-Mobile’s ongoing 5G build, and by flipping the switch on SA, the Un-carrier has immediately increased its 5G footprint by 30 percent — now covering 1.3 million square miles in more than 7,500 cities and towns across the country.

Let the Maps Do the Talking
In what Verizon and AT&T likely refer to as “the good old days,” they led in coverage and weren’t shy in telling the world about it.

Oh, how times have changed.

It’s a new era in wireless, and T-Mobile holds the 5G coverage crown. Adding the SA coverage boost to America’s first and largest nationwide 5G network, T-Mobile further dwarfs the competition. The Un-carrier’s 5G network is more than two times bigger than AT&T’s and more than 10,000 times bigger than Verizon’s! Just look at the maps, and it’s clear why Verizon customers can only connect to 5G ZERO-POINT-FOUR percent of the time.

Building the future takes a lot of work. To make the world’s first nationwide commercial SA 5G network a reality, T-Mobile partnered closely with Cisco and Nokia to build its 5G core, and Ericsson and Nokia for state-of-the-art 5G radio infrastructure. OnePlus, Qualcomm Technologies and Samsung have helped the Un-carrier ensure existing devices can access SA 5G with a software update, based on compatibility.

About T-Mobile US, Inc.
T-Mobile U.S. Inc. (NASDAQ: TMUS) is America’s supercharged Un-carrier, delivering an advanced 4G LTE and transformative nationwide 5G network that will offer reliable connectivity for all. T-Mobile’s customers benefit from its unmatched combination of value and quality, unwavering obsession with offering them the best possible service experience and undisputable drive for disruption that creates competition and innovation in wireless and beyond. Based in Bellevue, Wash., T-Mobile provides services through its subsidiaries and operates its flagship brands, T-Mobile, Metro by T-Mobile and Sprint. For more information please visit: http://www.t-mobile.com.