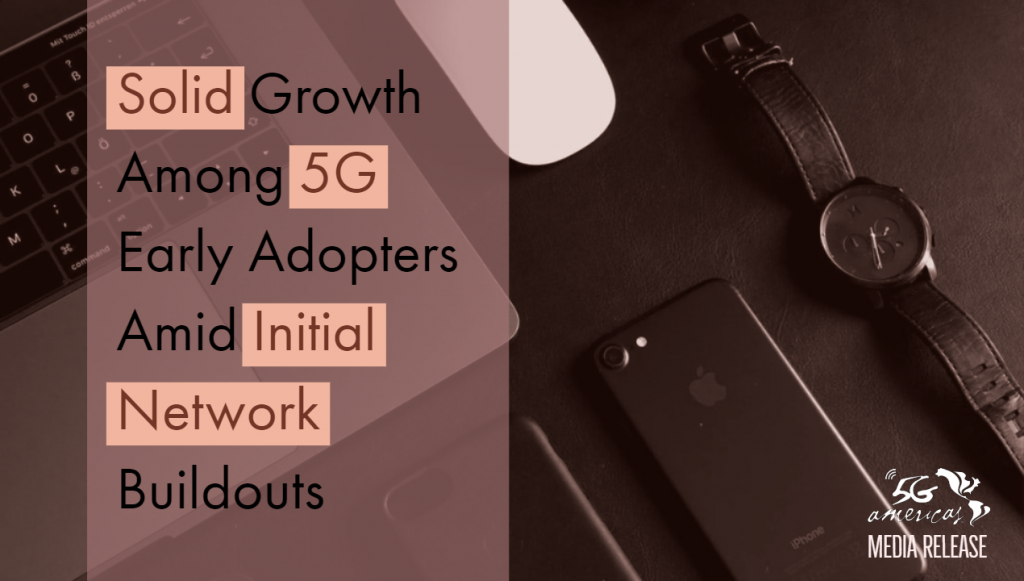 BELLEVUE, Wash. – December 12, 2019 – Early adopters of 5G technology have begun to take advantage of numerous initial 5G network rollouts in 2019, according to 5G Americas, the wireless industry trade association and voice of 5G and LTE for the Americas. According to data based from Ovum, there are now four million 5G connections globally as of the third quarter of 2019, an increase of 166% over the second quarter.

Chris Pearson, President, 5G Americas said, “Early adopters in 5G technology are testing the waters to see what their devices can do on the new technology. They’re taking advantage of new capabilities now being offered by several 5G networks that have come online over the past quarter. We expect to see a strong ramp up in 2020 as more devices become available and coverage expands throughout the world.”

There are now 50 commercial 5G networks globally, which adhere to 3GPP standards. That number is expected to increase to 67 5G commercial networks by the end of 2019, according to data from TeleGeography.

According to Jose Otero, Vice President of Latin America and Caribbean, 5G Americas, “LTE continues its growth in Latin America and the Caribbean as the technology increases its geographic coverage, lower cost smartphones become available, and operators adopt strategies seeking to migrate subscribers to LTE that until recently were using second and third generation services.”

Looking forward, data from Ovum estimates the number of 5G subscribers will accelerate rapidly through the end of 2019, reaching 12.9 million connections. That number is expected to reach 1.3 billion, or 12.9% global market share in 2023.

Says Otero, “Upcoming spectrum auctions in Brazil, Colombia, El Salvador and Uruguay could accelerate the deployment of LTE in the region increasing the technology’s potential addressable market. The region has launched three 5G commercial networks and could have more by the end of 2019.”

Overall, the following number of networks using wireless technologies have been deployed as of December 11, 2019, according to TeleGeography:

For more information and to view a variety of statistical charts on the 3GPP family of technologies, and for a list of LTE and 5G deployments by operator, by region visit www.5GAmericas.org. Subscriber and forecast data provided by Ovum and deployment data by TeleGeography (GlobalComm).

5G Americas is an industry trade organization composed of leading telecommunications service providers and manufacturers. The organization’s mission is to advocate for and foster the advancement and full capabilities of LTE wireless technologies and their evolution to 5G, throughout the ecosystem’s networks, services, applications and wirelessly connected devices in the Americas. 5G Americas is invested in developing a connected wireless community while leading 5G development for all the Americas. 5G Americas is headquartered in Bellevue, Washington. More information is available at www.5gamericas.org or Twitter @5GAmericas.

Want to know more about how people will use 5G?