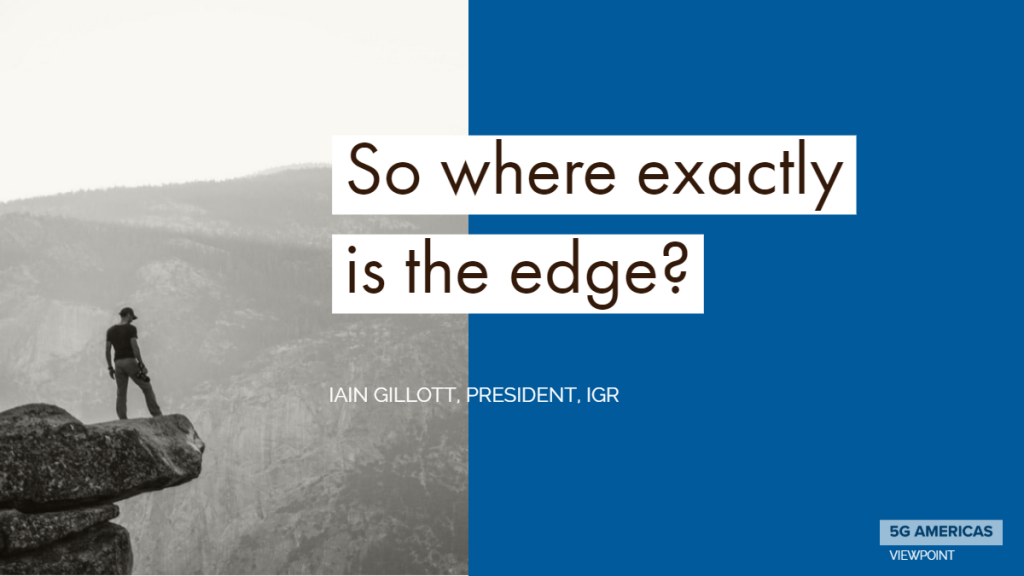 So where exactly is the edge?

Edge computing (EC) – and there are several different versions/approaches – emerged on the wireless industry stage several years ago. It has the potential to be as disruptive a technology as anything that is being discussed today – 5G New Radio, NFV/SDN, C-RAN, etc. In fact, EC is quite likely to help realize the promise of 5G particularly since the new 5G system architecture is designed to capitalize on virtualization.

Before we discuss where the edge actually is, we should first agree on a definition of edge computing.  iGR defines an edge computing hardware platform as a secure, virtualized platform which can be “opened up” to third parties – content providers, application developers, etc. That platform might incorporate an LTE radio, Wi-Fi, 5G NR or some combination of them. Today, most edge compute implementations use Ethernet and/or Wi-Fi and not cellular. Over time, iGR believes that will change as private LTE networks  get deployed and 4G/5G-based IoT devices are brought to market.

It could be argued that mobile edge computing is a subset of the mobile cloud computing concept in which user equipment takes advantage of “distant” storage and compute resources, along with the transport provided by the RAN, to:

Network operators also benefit from edge computing since they are able to:

You could say that the edge is located where, if you take one more step, you fall of the cliff!

In networking terms, the ‘edge’ typically means a location that is very close to the end consumer of the content. This can mean different locations for an operator versus an enterprise. And depending on the type of content, the type of end user and the specific needs of the application, the edge could be in very different places.  There are essentially multiple ‘edges’ depending on need.

Some considerations in deciding where to locate the edge computing server include:

These and many other questions have to be answered on an application-by-application, company-by-company and/or operator-by-operator basis. The goal here is simply to show that there is a lot more to edge computing than simply stating that edge compute enables AR/VR in a potentially more robust fashion than running all of that on the user equipment. And none of the above really dives into the business case conflicts that will certainly arise among all the various companies that are trying to provide their product/service to their (mobile) customer in the least expensive, most value-added fashion.

At a high level, the edge computing answer to these questions involve providing “general purpose” computing hardware in a secure form factor on which secure, virtualized software can be run. These edge nodes can emulate parts of the core network, serve as reliable caching units and/or run virtualized applications from any number of an operator’s developer partners.

Where can edge compute be placed?

The answer to this question is easy:  anywhere and everywhere!

Edge compute servers by definition need to be close to the end user, have a reliable source of power and backhaul, be in a secure location (both physically and from a network perspective), and be accessible for maintenance, etc.  Some typical locations for EC therefore include:

To summarize, virtualized applications from vendors, service providers, and third-parties would be deployed and executed within virtual machines that run on edge compute platforms located in a range of different places.  A single edge compute platform can run multiple VMs; which lets the hardware resources be leveraged across multiple applications and perhaps even service providers in a controlled, efficient, scalable and flexible manner.

The location for edge computing servers is limited only by the availability of secure power and backhaul, a secure location and imagination.  While this article outlined some typical EC locations, the reality is that new locations are being defined every day to meet specific content and application needs, with many more to come.

A more complete profile of the company can be found at http://www.iGR -inc.com/.

Find out more about edge computing and 5G networks