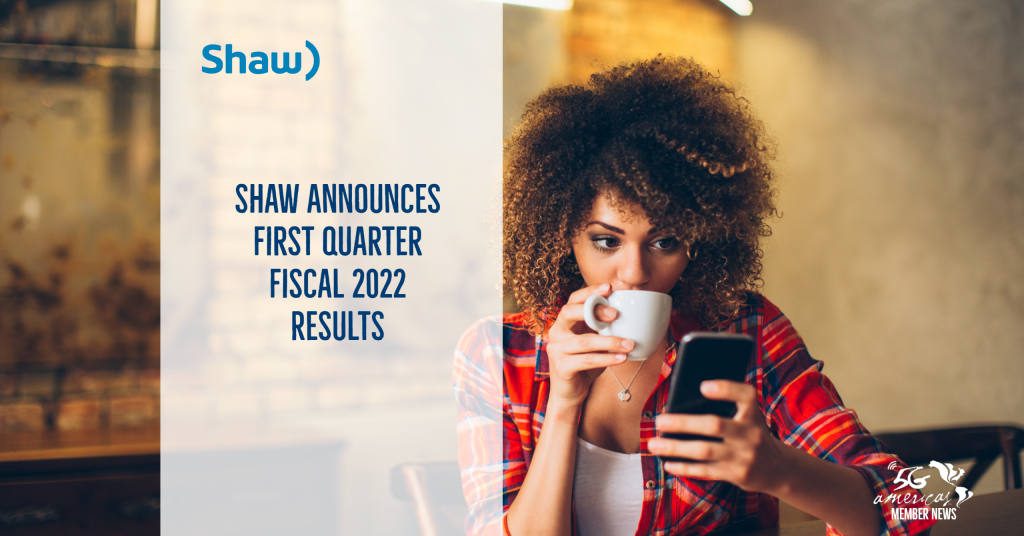 While we continue to experience new waves and variants of the COVID-19 virus, management remains focused on the safety of our people, most of whom continue to work from home, compliance with guidelines and requirements issued by various health authorities and government organizations as well as fast and ubiquitous connectivity for our customer base.

“Since the beginning of the COVID-19 pandemic and continuing today, strong and reliable connectivity plays a critical role in the lives of our customers, our economy and its recovery. We remain committed to delivering exceptional customer experiences, investing in the strength of our networks and continued focus on execution of our strategic business priorities. Our combination with Rogers will do more for the future prosperity of Canada than either company could achieve on its own. Together, Rogers and Shaw can build a national next-generation network that will offer robust and effective competition over the long-term, and bridge Canada’s digital divide benefiting rural, remote and indigenous communities. The resources and network of the combined company will help accelerate Canada’s digital economy and stimulate greater economic diversification in Western Canada. We recognize that we can do so much more by coming together and reiterate our continued commitment to work with Rogers to close the transaction while delivering the benefits that the combined entity will provide Canadians,” said Brad Shaw, Executive Chair & Chief Executive Officer.

On March 15, 2021, Shaw announced that it entered into an arrangement agreement (the “Arrangement Agreement”) with Rogers Communications Inc. (“Rogers”), under which Rogers will acquire all of Shaw’s issued and outstanding Class A Participating Shares (“Class A Shares”) and Class B Non-Voting Participating Shares (“Class B Shares”) in a transaction valued at approximately $26 billion, inclusive of approximately $6 billion of Shaw debt (the “Transaction”). Holders of Class A Shares and Class B Shares (other than the Shaw Family Living Trust, the controlling shareholder of Shaw, and related persons (collectively, the “Shaw Family Shareholders”)) will receive $40.50 per share in cash. The Shaw Family Shareholders will receive 60% of the consideration for their shares in the form of Class B Non-Voting Shares of Rogers (the “Rogers Shares”) on the basis of the volume-weighted average trading price for the Rogers Shares for the 10 trading days ending March 12, 2021, and the balance in cash.

The Transaction remains subject to other customary closing conditions including approvals from certain Canadian regulators. Shaw and Rogers are working cooperatively and constructively with the Competition Bureau, Innovation, Science and Economic Development Canada (ISED) and the Canadian Radio-television and Telecommunications Commission (CRTC) in order to secure the requisite approvals. Subject to receipt of all required approvals and satisfaction of all closing conditions, closing of the Transaction is expected to occur in the first half of 2022.

In the first quarter, the Company added approximately 55,600 new Wireless customers. Postpaid net additions of approximately 36,100 in the quarter were driven by the continued momentum of Shaw Mobile. Wireless service revenue grew 11.2% due to continued subscriber growth, partially offset by lower ARPU2 as the Company continues to scale its lower revenue Shaw Mobile customer base. First quarter Wireless ARPU decreased 3.4% from the prior year period to $36.95; however, an increase in customers signing up for bundled offerings and Internet migration to faster speed tiers continues to support Internet revenue growth. Wireless postpaid churn3 of 1.70% improved approximately 11-basis points from the first quarter of fiscal 2021.

Consumer Wireline RGU4 losses of approximately 76,200 improved over the prior year period, led by positive Internet additions as customers continue to bundle their Internet and Wireless service together. First quarter Wireline revenue was in-line with the prior year at $1.06 billion and Wireline adjusted EBITDA decreased 1.5% year-over-year to $524 million.

First quarter Wireless revenue increased 4.7% to $332 million and adjusted EBITDA of $109 million increased 45.3% year-over-year. Wireless service revenue increased 11.2% to $239 million due to an increased subscriber base, while Wireless equipment revenue decreased 8.8% to $93 million as more consumers took advantage of bring their own device plans. The increase in adjusted EBITDA is mainly due to continued service revenue growth and improved equipment margins as well as the favorable margin impact from lower equipment sales relative to total wireless revenues in the current quarter.

First quarter Wireline revenue of $1.06 billion was in-line with the prior year while adjusted EBITDA of $524 million decreased 1.5% year-over-year. Consumer revenue of $896 million decreased 1.6% compared to the prior year as growth in Internet revenue was offset by declines in Video, Satellite and Phone subscribers and revenue. Business revenue of $161 million increased 11.0% year-over-year with Internet revenue growth and continued demand for the Smart suite of products, despite the challenging circumstances due to impacts of COVID-19 and considering the majority of Shaw Business revenue comes from the small to medium sized business sector. First quarter Business revenue included approximately $9 million of revenue related to a financing lease arrangement involving a facility that was designed and built to customer specifications. This item also had a $1 million favourable impact on adjusted EBITDA in the quarter.

Capital expenditures in the first quarter of $229 million compared to $234 million in the prior year. Wireline capital spending increased by approximately $29 million primarily due to higher investments in combined upgrades, enhancements and replacement categories as well as an increase in new housing development. Wireless spending of $39 million decreased by approximately $34 million year-over-year primarily due to lower planned investment in the quarter.

Free cash flow for the quarter of $236 million compared to $225 million in the prior year. The increase was due to higher adjusted EBITDA and lower capital expenditures, partially offset by increased cash taxes.

Shaw is traded on the Toronto and New York stock exchanges and is included in the S&P/TSX 60 Index (Symbol: TSX – SJR.B, NYSE – SJR, and TSXV – SJR.A). For more information, please visit www.shaw.ca

MANAGEMENT’S DISCUSSION AND ANALYSIS
For the three months ended November 30, 2021

The following Management’s Discussion and Analysis (MD&A) of Shaw Communications Inc. is dated January 12, 2022 and should be read in conjunction with the condensed interim Consolidated Financial Statements and Notes thereto for the quarter ended November 30, 2021 and the 2021 Annual Consolidated Financial Statements, the Notes thereto and related MD&A included in the Company’s 2021 Annual Report. The financial information presented herein has been prepared on the basis of International Financial Reporting Standards (IFRS) for interim financial statements and is expressed in Canadian dollars unless otherwise indicated. References to “Shaw,” the “Company,” “we,” “us” or “our” mean Shaw Communications Inc. and its subsidiaries and consolidated entities, unless the context otherwise requires.