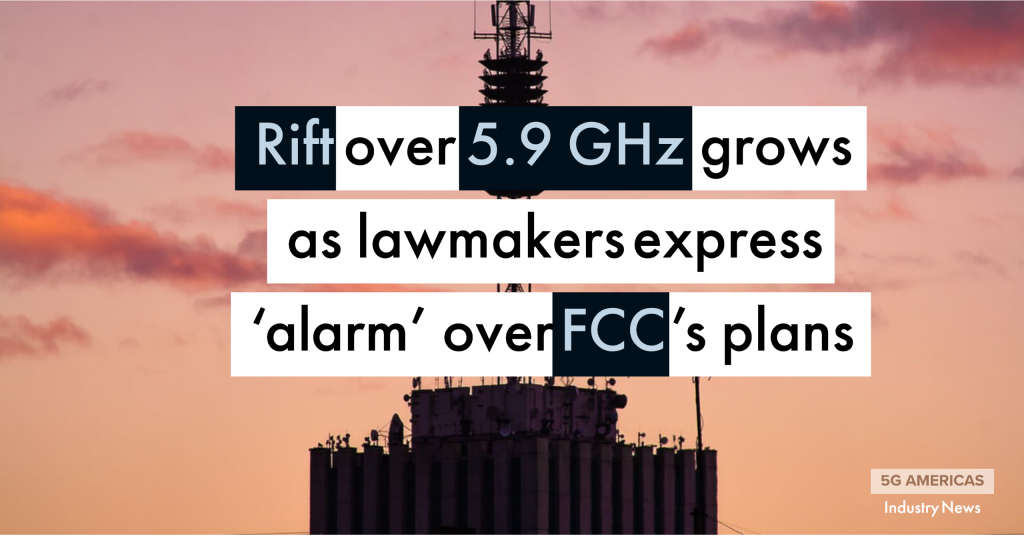 Lawmakers sent a letter to the Federal Communications Commission (FCC) on Wednesday saying they’re “alarmed” by the FCC’s proposal to reallocate more than half of the 5.9 GHz band to unlicensed operations such as Wi-Fi.

The 38 lawmakers, who are members of the House Committee on Transportation and Infrastructure, say the proposal undercuts the potential to prevent many of the 37,000 traffic fatalities each year by “impeding the development and deployment of safety-critical technologies.”

The letter (PDF) notes that U.S. Department of Transportation (DoT) Secretary Elaine Chao wrote to FCC Chairman Ajit Pai on November 20, 2019, outlining the DoT’s opposition to the FCC’s 5.9 GHz Notice of Proposed Rulemaking (NPRM), saying the DoT has “significant concerns with the commission’s proposal, which represents a shift in the FCC’s regulation of the 5.9 GHz band and jeopardizes the significant transportation safety benefits that the allocation of this band was meant to foster.” The lawmakers said they concur with that statement.

The NPRM attempts to take a “fresh look” at the 5.9 GHz band, proposing to dedicate the upper 30 megahertz portion of the band for transportation and vehicle safety purposes, while repurposing the remaining lower 45 megahertz part of the band for unlicensed operations. The FCC voted unanimously in December on a proposal to designate 20 megahertz for the deployment of C-V2X in the band, and asked for comment on whether the remaining 10 megahertz of spectrum in the upper part of the 5.9 GHz band should be allocated for DSRC or C-V2X.

In their letter to the FCC, the transportation committee members said the FCC allocated the 5.9 GHz band to dedicated short range communications (DSRC) for intelligent vehicle transportation systems (ITS) back in 1999 and the technology is critical to reducing highway fatalities. Beyond DSRC-based deployments, private sector companies are researching and testing C-V2X technology that would also use the 5.9 GHz band.

“While the FCC has expressed concern with the slow pace of development and deployment of vehicle safety technologies in the 5.9 GHz band, the FCC’s recent actions have only exacerbated the problem and upended any progress being made,” the lawmakers wrote. “On December 19, 2019, the FCC announced a temporary freeze on acceptance and processing of 5.9 GHz license applications. Additionally, the Committee understands that the FCC has been sitting on approximately 500 applications for DSRC Roadside Unit licenses. The Committee remains deeply concerned with how the FCC’s actions have continued to create uncertainty for the private sector that this band will not be available in the future.”

In response, WiFi Forward, which is an ad-hoc group of companies and organizations, including Google, Microsoft, Boingo, WISPA, Comcast and Public Knowledge, issued a statement about the need for more spectrum for next-generation Wi-Fi and how the FCC chairman and his colleagues are working to make that happen.

“The 5.9 GHz band is unused in the vast majority of the country the vast majority of the time and this is the best near-term opportunity to help with that crunch,” the group said. “The FCC has proposed a win-win; providing airwaves for wireless broadband and innovative automotive safety applications in a way that has garnered broad bipartisan and cross-industry support.”