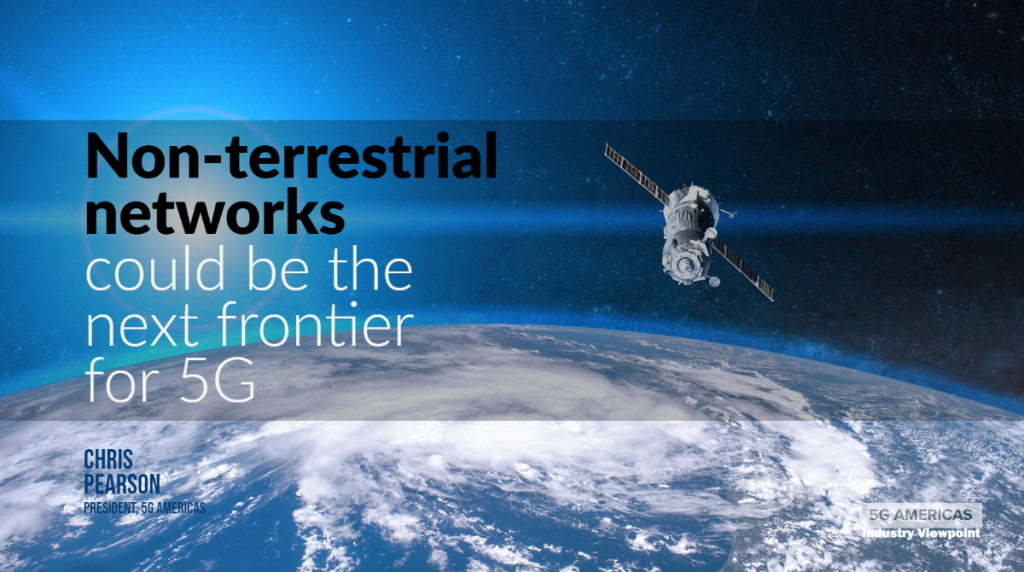 Non-terrestrial networks could be the next frontier for 5G

On October 4, 1957 at precisely 10:28 PM local Moscow time, a small, shimmering globe with four long protrusions left the safety of planet Earth and entered into an elliptical low Earth orbit (LEO), launched there by scientists and engineers of the Soviet space program. The Sputnik satellite orbited for three weeks before its batteries ran out, but it helped launch a new era in human space travel and communication.

Could NTN’s be the next frontier for 5G Networks? Only time will tell us that answer!  Private entities are the fast rising stars of the space industry now, ever since U.S. showed its space leadership by being the first country to have an astronaut walk on the Moon.

In “5G & Non-Terrestrial Networks,” 5G Americas explores the burgeoning NTN communications advances. What needs to happen to integrate NTNs with 5G networks? What are the opportunities and challenges?

The first thing to keep in mind is that satellites are just one element of non-terrestrial networks. A wide variety of objects can form part of a non-terrestrial network, including high-altitude platform stations like balloons, air-to-ground networks such as those transmitted from aircraft, and unmanned aerial vehicles (UAV’s) – each operating at different altitudes and providing different types of connectivity and capabilities. The figure below is a good depiction of the variety we’re talking about here, along with which area is being worked on by the Third Generation Partnership Project (3GPP) for integration into 5G networks.

It’s important to realize that different NTN networks may impact 5G RAN and 5G Core networks differently, particularly when it comes to synchronization and data delays. When you think about it, it makes sense. Each of these different kinds of networks need to be integrated with 5G networks along a variety of lines, including NTN security, ensuring end-to-end quality of service, positioning of the NTN elements over fixed terrestrial network infrastructure. Additionally, Narrowband IoT and machine-type communications also provide additional considerations for NTN integration – how will these NTN’s be able to communicate with up one million devices per square kilometer, something which underpins 5G network capabilities?

Moreover, several options exist that allow NTNs and TNs to talk to each other, including “co-exist mode”, as well as roaming and sharing modes, that provide different degrees of integration. Other factors for interoperability include the availability of end user equipment and country-specific public land mobile network systems.

In order to make this all work seamlessly, ensuring network service continuity is paramount when operating NTN networks in a 5G ecosystem. Literally hitting a swiftly moving target is much different than keeping a signal fixed in a tight beam for terrestrial cellular wireless networks. As an NTN element (balloon, plane, UAV, satellite) passes overhead, it must be able to communicate with an, often, mobile piece of user equipment on the ground. Specifically, moving beam scenarios will be impacted by the time a piece of user equipment (UE) remains in the beam’s cell area, while fixed beams generally have longer times when a UE is in the cell area.

In addition to that, the NTN must also recognize several other factors, that include initial cell selection, mobility while a device is idle, and mobility management while they are in connected mode.

Each of these different types of satellites offer different capabilities due to the cost and complexity of their construction, deployment, and maintenance, but also to the physical ability of data to be transmitted over different distances impacting network latencies. Generally speaking, the greater the network latency, the less suitable that network will be for use cases that require very little latency, such as voice communications, VR, autonomous vehicle operation, extremely precise manufacturing processes, or sensitive healthcare operations.

5G standards developed by 3GPP make satellite segments a potentially larger part of the ecosystem of the 5G connectivity infrastructure. Traditionally, backhaul options over MEO and GEO satellites have been challenging due to their higher latencies – it simply takes longer for data to be transmitted the further away it is to the satellite. However, with 3GPP Release-17, LEO satellites with lower latencies can show improved performance in 5G networks.

Additionally, a satellite can have a “transparent” or a “regenerative” (including on-board processing) payload. Transparent payloads provide basic operations like radio frequency filtering, frequency conversion, and amplification – but nothing that requires processing like demodulating or decoding, routing and switching, or coding/modulating at the satellite. Satellite frequencies in the “S-Band” 1980-2010 MHz / 2170-2200 MHz and part of the “L” Band have been identified by the International Telecommunications Union (ITU), but every nation will decide how to use its spectrum differently.

As you can see, even as the growth of 5G wireless cellular networks continues to grow by leaps and bounds, there will certainly be places in the world where NTN and satellite access will potentially be needed. When NTNs can integrate with existing 5G coverage, it can extend the capabilities of 5G networks to places where you might not expect cell coverage to reach alone – it is truly a new frontier for wireless cellular communications.

I’m not pinning my hopes on it, but maybe by the time you’ve read this, I’ll be testing that 5G signal on that boat in the middle of the Caribbean.