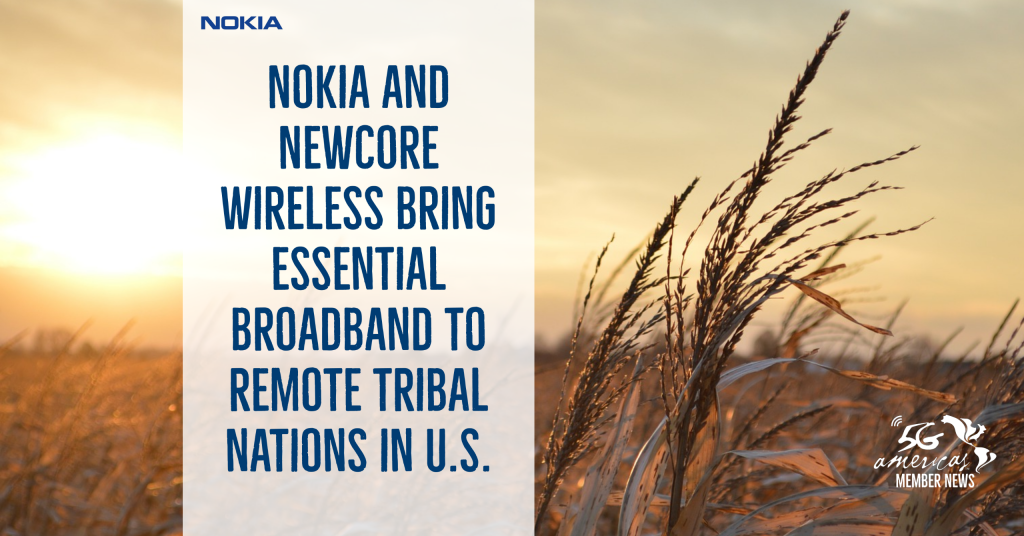 The program leverages up to 117 MHz of the Tribal EBS band, made available by the Federal Communications Commission (FCC), to serve tribal lands with a license for broadband and wireless networking buildouts. Spectrum is very valuable and can be used to deploy carrier-grade voice or broadband connectivity. The 400 Native American tribes awarded this spectrum in 2020 cover tens of thousands of square miles – often in remote or rural areas – and include millions of members.

Nokia’s wireless technologies for rural broadband connectivity, such as 4.9G/LTE and 5G, allow for rapid and cost-effective wireless connectivity across large areas and provide the scope for multiple home and business connections from a single base station. Private wireless, which is based on 4.9G/LTE technology, opens the door to services such as high-speed internet to the home or business up to 1 Gbps, mobile phone options where cellular coverage is not available, or educational enhancements such as distance learning.

The initial buildouts with NewCore and Nokia will focus on North and South Dakota, Oklahoma and California. The Native American communities involved include the Standing Rock Sioux Tribe and the Cheyenne and Arapaho Tribes.

John Pretty Bear, Councilman for the Standing Rock Sioux Tribe’s Cannonball District, said: “This initiative with Nokia and NewCore will go a long way to leveling the technology playing field for the people of the Standing Rock Sioux Tribe. All members of our community, including our elders whom we pride ourselves in helping, will benefit from more affordable and accessible connectivity. This is critical for the well-being of our people, especially during the pandemic where information about mass testing or vaccinations needs to be shared in real time. From online schooling, to telehealth, to affordable mobility and cellular phones, we look forward to improving the quality of life for everyone in our community.”

Reggie Wassana, Governor for the Cheyenne and Arapaho Tribes said: “The CARES Act that provided money directly to the tribes made it possible for us to establish three separate cellular towers in the region. It has not only allowed us to provide internet to the tribal emergency programs, but also to the tribal citizens within our service area.”

This partnership leverages the Nokia Digital Automation Cloud (DAC) alongside NewCore’s integration and operational capabilities to bring an integrated network of 4.9G/LTE and 5G radio and core elements, capable of serving every state in the U.S.

Albert Kangas, COO and General Manager, NewCore Wireless, said: “In rural communities across the U.S., mobile coverage is already scarce – with few small carriers left dedicated to serving those regions specifically. Many of the Native American reservations tend to be in rural areas of the U.S. What we hope to bring to these communities through our work with Nokia is a renewed sense of control over their future, by building out next generation broadband solutions to expand internet and mobile access for the most remote areas of North America.”

Raghav Sahgal, President of Cloud and Network Services at Nokia, said: “Millions of Americans lack basic broadband connectivity – particularly rural and tribal communities. Making spectrum available to tribal nations brings these communities into the next generation of connectivity and allows them to take advantage of the benefits of broadband. By enabling access to 4G and 5G through Nokia’s technology and partnership with NewCore, each tribe can improve their quality of life with new economic opportunities, and educational and health care access.”

The 2.5 Ghz band of spectrum offered by the Tribal EBS program is mature and can be found in the majority of mobile phones, telephone switching equipment and add-on device in the market today. Because current networks are already designed for this spectrum, it allows new carriers to deploy services immediately – using already available hardware. Being able to access more than 100 MHz of that spectrum is well suited for 4G, and a viable transition into 5G when communities are ready.

Read the Nokia news story: Nokia extends broadband to remote Native American tribes in the US

NewCore Wireless provides project design and construction managements services as well as consulting services to rural operators. NewCore Wireless has focused on ensuring that Tribal carriers are equipped with the essential knowledge needed for building and operating voice and broadband networks.

About Nokia
We create technology that helps the world act together.

Adhering to the highest standards of integrity and security, we help build the capabilities needed for a more productive, sustainable and inclusive world.