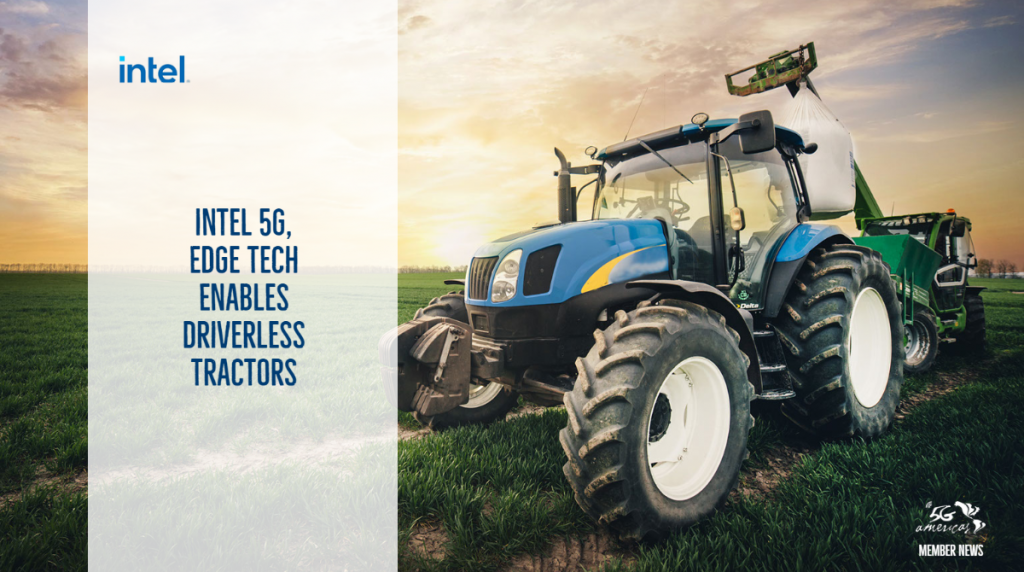 ​What’s New: At the Intel Vision event, Intel demonstrated the possibilities that open when the company pairs a high-bandwidth, low-latency private 5G wireless network with edge computing devices. Intel collaborated with Federated Wireless and Blue White Robotics to deliver technology that enables self-driving tractors at a California vineyard to automate repetitive tasks and free workers to take on higher-value responsibilities.

“As we look to the future for autonomous agriculture, we’re extremely optimistic for what 5G edge solutions can enable for customers, helping them create new business and revenue models.”—Caroline Chan, Intel vice president and general manager of the Network Business Incubator Division

How It Works: A farmer plots the tractors’ routes, and the fleet gets down to business. The tractors move across the vineyard in two shifts around the clock, navigating their way through fields without any humans at the wheel. Sensors on the tractors detect obstacles in their paths, while other sensors steer them around any anomalies.

Working together for more than a year, the companies put the autonomous tractors to work on repetitive tasks – weeding, mowing and applying herbicides – in the farm’s 2 square miles of grapevines.

Federated Wireless deployed a private wireless network to overcome a connectivity obstacle on the premises, which like most farms, is far from urban areas and does not have ample cellular or broadband connectivity coverage across all the acreage. That lack of connectivity means no sensors to collect real-time data from farm equipment and no way to automate farm tasks.

Why It Matters: “BWR approached us with a specific problem. They had a fleet of autonomous tractors in rural farmland, but these machines couldn’t talk with each other as there was almost zero connectivity on the farm,” said Bhupesh Agrawal, director of Private Wireless Networks and Edge Computing in Intel’s Network and Edge Solutions Group. “Without connectivity, there is no opportunity to process real-time data.”

What’s Next: Agrawal and his team are looking beyond grapevines to their next big challenge. They would like to scale into citrus farms and nut farms, while iterating along the way.

Why nut farms? Mainly for the challenge. Dense clusters of nut trees like macadamia – a commercially critical crop to California – present complex scenarios beyond neatly trimmed hedgerows of grapevines.

Agrawal looks at these farms not just as bunches of plants and trees, but as valuable fonts of information. Each is a data source that will “drive an insatiable appetite for compute demand at the edge” – but only if we can properly capture and process that data – while “delivering bigger impact to our customers, our partners and the community that we live in.”