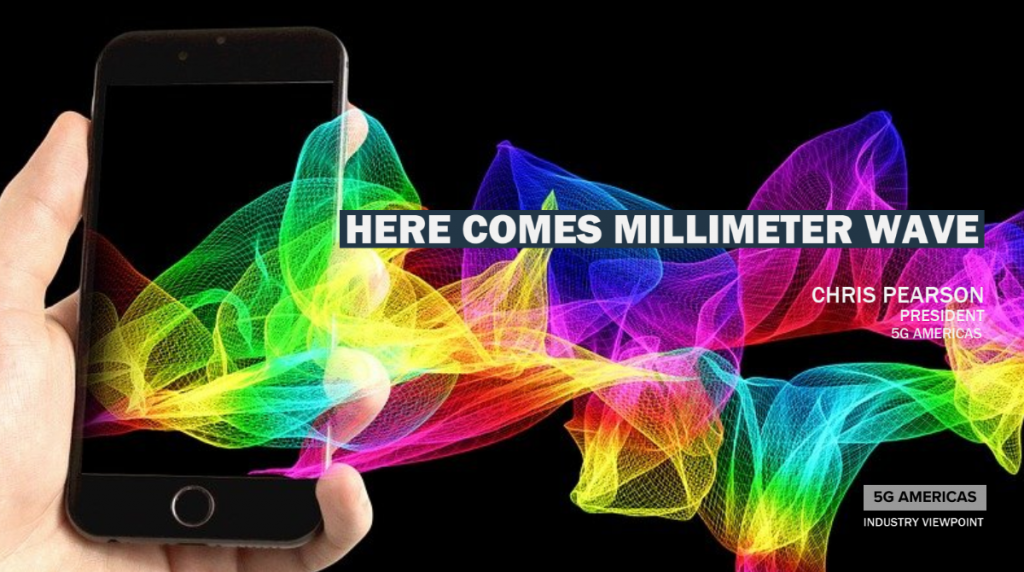 5G is much more than speed.  However, one of the most heralded abilities of 5G is its ability to deliver incredible download speeds. For the past couple of years, people have become increasingly excited about the possibility of incredibly fast 5G data rates, letting them stream higher quality videos and download much larger files faster. 5G networks can provide theoretical peak speeds up to 20 gigabits per second – enough to download an Ultra HD movie in around 10 seconds. That’s twenty times faster than 4G LTE’s peak data rate of 1 Gbps.

Faster speeds require large swaths of spectrum, whether that be low, mid or high band (mmWave).  There is indeed a huge challenge to finding these large swaths of spectrum. The U.S has been a leader in identifying, allocating and auctioning mmWave spectrum to allow for 5G deployments in this high band.  Up until now, wireless cellular networks have been deployed in a variety of spectrum bands, usually “low-band” spectrum below 1 GHz and “mid-band” spectrum between 1 and 6 Ghz. While low-band and mid-band spectrum are great at delivering data, mmWave spectrum takes it to a whole different level as there are hundreds of MHz of spectrum being used. 5G New Radio (5G NR) is the first mobile technology generation to make use of “high band” mmWave spectrum with frequencies at 24 GHz and above.

Our recent whitepaper, “Understanding Millimeter Wave Spectrum for 5G Networks” explains what millimeter wave is and how 5G networks are using it to unleash vast new opportunities in applications and services. While mmWave is not without its propagation challenges, the main attraction of mmWave spectrum still remains its large bandwidth. This characteristic makes it possible to deliver gigabit wireless services, allowing operators to meet the growing demand for high speed data for typical outdoor deployment scenarios, such as dense urban or suburban uses in a wide variety of industries, such as automotive.

So you ask yourself, is any of this new? I’ve been hearing about this for years. Well, yes mmWave is real with speed tests demonstrating, crazy 5G speeds today.

Many people don’t appreciate the amount of time and effort it takes to bring about a global wireless telecommunications standard. These are often decade-long affairs, involving incredible amounts of coordination and diplomacy from international standards bodies like the 3rd Generation Partnership Project (“3GPP”).

In reality, the 5G era began with the first specification set of “5G New Radio” (5G NR) standards developed by 3GPP in Release 15 in late 2017. Many ideas and technology developments were tossed around over the years – should beamforming be included in 4G LTE?  How about MIMO? What about millimeter wave? Minimum standards for what could be considered “5G” were set forth in the International Telecommunications (ITU) IMT-2020 document, which stated that 5G systems needed to have the capability to deliver download speeds up to 20 gigabits per second. In reality, the only game in town was networks that met 3GPP’s 5G NR specification benchmarks, of which there are now over 135 5G networks deployed as of November 2020.

As mentioned above, when it comes to mmWave spectrum, the United States is one of the global leaders in releasing millimeter wave to the general public. In January 2019, the US government completed its auction of 28 GHz airwaves, followed up with an auction of the 24 GHz airwaves in May 2019, which sparked some tremendous interest in the wireless cellular community in developing an ecosystem of organizations and companies that would build the services, applications, and devices capable of using these frequencies. The US government also released rules specifications which highlight a few key areas for millimeter wave use: mobile and fixed wireless access (FWA), point to point backhaul, and unlicensed and shared access.

But let’s take a step back. How does mmWave spectrum allow 5G to accomplish such amazing feats of high speed and bandwidth? The real power (and challenge) in mmWave spectrum lies in its propagation characteristics. On the positive side of the equation, as it is a high-frequency, short wavelength type of spectrum, it has four main things going for it:

So what does that mean? There’s a lot of it, you can use much larger chunks of it for higher bandwidth, you can fit smaller mmWave radios into devices – and it greatly reduces network lag. So what’s the catch?

On the challenging side of the equation, millimeter waves don’t propagate as far as low-band or mid-band signals, so there is a much smaller target area used to receive a signal, compared with sub-6 GHz signals. In addition, millimeter wave signals are subject to more diffused scattering when in contact with large objects, and they receive higher signal loss from foliage, object penetration, and from the atmosphere. This means you have to put a lot more millimeter wave signal repeaters around, so you get good mmWave coverage.

The upshot is that, at this time, mmWave spectrum is generally best suited for short range transmissions. With that in mind, it can provide a variety of benefits, from coverage extension at the edge of the network, to capacity enhancement, to backhaul.

Wireless backhaul, in particular, provides a very interesting use case for millimeter waves. Backhaul basically refers to providing data to the cell site. Due to the very high bandwidths and speeds that millimeter waves offer, when paired with network densification and massive MIMO, they can provide ultra-high-speed access and backhaul to 5G networks. This can be “fixed wireless access” to consumers, integrated access and backhaul for harder to reach cell sites – or even dedicated wireless backhaul.

Moreover, siting of millimeter-wave capable 5G new radios can simply be built onto existing 4G LTE footprints. This kind of co-siting allows for the network to fall back to 4G LTE when access to the 5G mmWave is not available, such as when it is being used by other users. Qualcomm demonstrates what such a capacity layer might look like in terms of coverage percentage.

As we continue to forge ahead in 5G networks, all types of low, mid and high band spectrum will be critical to reach the promise of 5G.  It is obvious that millimeter wave spectrum can play an important role for delivering new 5G services and applications. Consumers and businesses will ultimately demand as much data speed as networks can handle. After all, video has moved from the old days of 360p, to 720p, to 1024 HD, ultra HD 4K and 8K. Higher video quality demands more and more bits, and even more intensive uses such as blockchain and AI will continue to put tremendously higher demands on both computation and transmission of data.

Many people today are leery about 5G speed claims, often asking “how much does the consumer really need?” To those folks, I ask, “is enough ever really enough?” The market has always found ways to deliver amazing new applications by using the resources it has at hand. With millimeter wave 5G, who knows where the next wave of industrial evolution will take us? There are so many forces at work, so many technologies at play – and so many good smart people with bright minds engaged in thinking about the next biggest thing.

I have no doubt 5G will lead to bigger and better things when powered by millimeter waves, and neither should you.

Find Out More About Millimeter Waves

Our white paper "Understanding mmWave Spectrum for 5G Networks" gets into the gritty details of millimeter waves. What makes them work? How are they best used?
Click Here