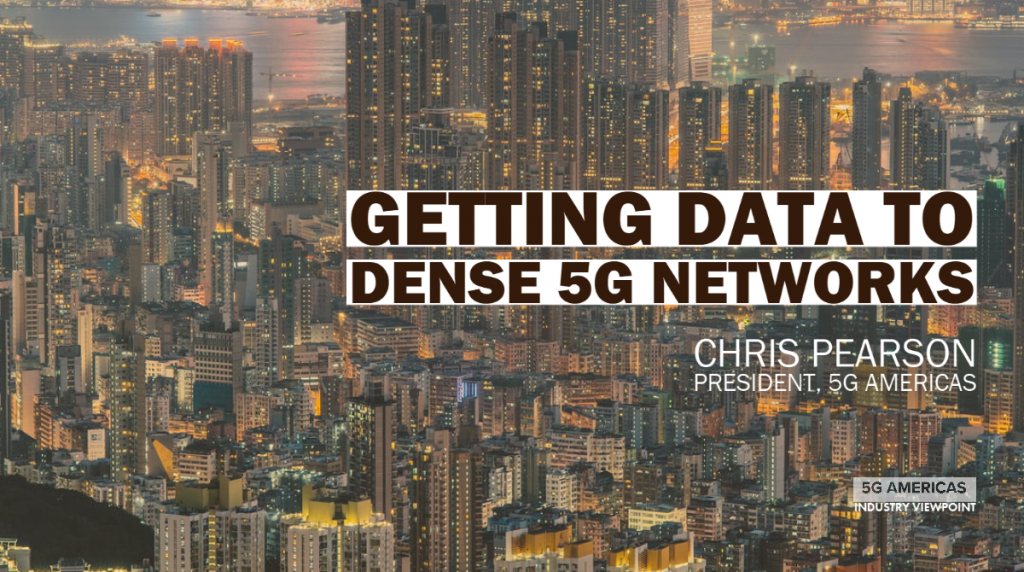 Getting Data to Dense 5G Networks

The fifth generation of wireless cellular networks, or “5G”, is truly at the beginning of a wonderful time for a evolution and  revolution in mobile communications. As of June 2020, there are 82 5G networks around the world, a number which is expected to grow to 206 by the end of 2020. As the number of 5G networks continues to expand, so will the density of cell sites needed to power them. Furthermore, the growth of 5G  by enterprise and consumer growth is robust with 5G connections expected to grow to well over 1 billion by the end of 2023.

When it comes to building networks, there are many things to consider. Some of these include power, capacity and overall data throughput demand. According to Ericsson, global total mobile data traffic will grow by a factor of four between the end of 2019 to 2025 – from around 38 exabytes per month in 2019 to 160 exabytes per month by the end of 2025. How will wireless network operators be able to manage all of this data?

One key ingredient is having enough licensed spectrum, but the other is network densification. Network densification is the process of adding more cell sites to increase the amount of coverage and capacity on a network. In order to do so, the network must have a data connection at the cell site that brings together information that the radio access network (RAN) receives over the air from mobile devices, run through series of signal and data processing in the RAN, and managed all the way back to the core network.

To keep track of this data, network professionals use the terms “backhaul”, “midhaul” and “fronthaul” to designate of which parts of the network the data are connected. These designations can get challenging because there are several ways in which the three key elements of a RAN may be placed geographically, including the centralized unit (CU) housed at the central office or data center, the distributed unit (DU) located regionally, and the remote unit (RU) at the cell site.

The 5G Americas white paper Innovations in 5G Backhaul Technologies: IAB HFC and Fiber is focused on new and innovative ways that Integrated Access and Backhaul (IAB), Hybrid Fiber Coax (HFC), and Fiber can be used to improve the amount of data that can be passed between the 5G core network and the 5G centralized unit: the backhaul.

One key thing in understanding how much backhaul is required is understanding that data transport requirements change depending on how much raw processing power is being utilized at each location in the RAN – at the CU, DU or RU.

For instance, 5G allows for the creation of “functional splits” in the RAN where specific processing tasks are handled by different units. The more processing that is done there, the bigger the “data pipe” needed to support it. Ultimately, the decision to determine the functional split of the RAN is based on the underlying and future planned architecture of the network. The table below shows the difference in data rates, latency and distance that are required for each unit of the RAN, depending on how it is arranged according to the functional split.

One of the key innovations in wireless backhaul is Integrated Access and Backhaul (IAB), which allows for the use of a portion of radio access spectrum to be used for backhaul as well. Traditionally, cell sites have been connected via point-to-point “dark fiber,” that is, fiber optic cables which already exist in the ground or on utility poles. When that fiber isn’t available, it can be incredibly costly for network operators to deploy new fiber, which might involve complex trenching and challenging in-building obstacles. In fact, studies show that in the U.S. alone at least $130 billion in fiber builds is required to reach the full performance that 5G promises.

IAB solves this problem by allotting some of the spectrum that would’ve been used by the RAN and using it to connect the CU to the core network. This technology has generated a lot of interest in the industry, since IAB is expected to provide a cost-efficient and fast time-to-market backhaul solution. IAB can use many of the great tools of spectrum management, including time, frequency, and spatial division multiplexing to greatly enhance the efficiency of the spectrum for backhaul purposes. Additionally, network operators have many ways of using IAB, including network densification, filling coverage holes, providing on-demand coverage, and general capacity expansion.

However, care must be taken so that its use does not impact network quality due to interference or the reduction in capacity due to the complex multiplexing mechanisms used between access and backhaul. Additional considerations must also be given to network topology, routing, quality of service (QoS) and emerging & future technologies that may re-shape the way that IAB is deployed. At the time of this writing, IAB is standardized in 3GPP Release 16, which is to be finalized at the end of June 2020, and aims to reuse the existing 5G radio air interface for backhaul purposes.

Both HFC and PON are already extensively deployed in areas where 5G will be in the most demand, specifically dense urban and urban environments. North America already has several multi-gigabit shared infrastructure solutions that are already deployed virtually down every street and to every building on the continent. The first such network is the hybrid fiber coaxial (HFC) network that is owned and deployed by U.S. cable companies and reaches 93% of American households.

One critical aspect of HFC networks is the use of the new data-over-cable service interface specification DOCSIS 4.0 specification, which will allow HFC networks to deliver multi-gigabit per second capabilities. Under an HFC/DOCSIS system the “head end” of a cable system is connected by feeder fiber to an optical node, which is further split by distribution coaxial cable by an RF splitter to buildings. A new technology standard called low-latency xhaul (LLX) can also dramatically reduce latency issues involving HFC networks.

Similar to HFC networks, passive optical networks (PON) have been extensively deployed throughout North America over the past couple of decades. PON is used to provide fiber-to-the-home and fiber to the premises, and widely deployed over many urban areas. A recent analysis by Bell Labs showed that leveraging existing FTTH networks can decrease 5G transport costs by more than 50% compared to traditional solutions such as microwave and P2P dark fiber.

Over the years, improvements to PON have been developed by the International Telecommunications Union (ITU-T), which have evolved greater data rates with each iteration.

The Institute of Electrical and Electronics Engineers (IEEE) has created even more PON standards, with even greater data rates.

In addition to PON, advances in Ethernet-based transport such as new radio encapsulation techniques, time-sensitive networking (TSN) and radio-over-Ethernet (RoE) are transforming 5G fronthaul networks. While Ethernet has become the de facto standard for cell site backhaul because of its low cost, multi-vendor interoperability, service flexibility, and ubiquity, using Ethernet in fronthaul networks, offers the prospect of significantly reducing the cost of C-RAN architectures. Such an architecture might look something like this below:

Finally, wavelength division multiplexing (WDM) can be applied across a broad range of technologies to meet critical 5G transport requirements. WDM is a technology that multiplexes a number of optical carrier signals onto a single optical fiber by using different wavelengths of light. This allows you get more data through the same number of fiber strands – a very effective way to boost the efficiency of existing fiber assets.

Today, 5G network operators are faced with an increasing array of new choices in designing, architecting and managing their networks. As consumer and business use cases become more specialized and data requirements become more demanding, it will be necessary to continue to build the right kind of network to deliver the best customer experience. Ultimately, this could lead to a service-based architecture, so ensuring the network has the right level of infrastructure operational will be critical the success of these endeavors.

It’s an exciting time for the wireless cellular industry. The ongoing Coronavirus pandemic has demonstrated that people and things, more than ever, need to remain connected. We are rapidly moving into this new age of remotely-connected Industry 4.0. I can’t wait to see what’s next around the corner.