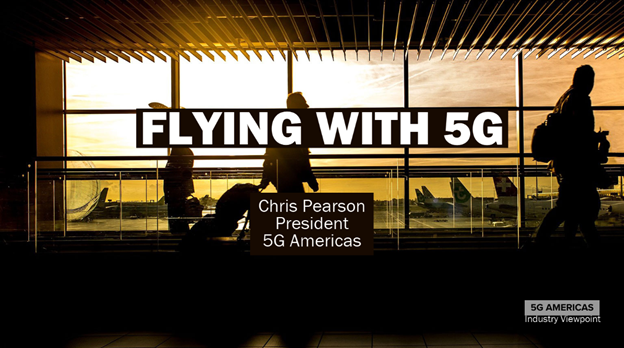 As the global pandemic continues to recede in certain parts of the word, the summer travel season is starting to return. After 18 months or more of lockdown, many travelers are replacing the work-from-home on Wi-Fi experience with a mobile work-on-the-move 5G experience.  Travelers don’t often, if ever, think about the importance of international harmonized spectrum and quite frankly, they shouldn’t have to.  It is up to all of the key stakeholders in various industries using the valuable radio spectrum to ensure of harmonization without interference.

According to the most recent data from Omdia, there were 298 million 5G wireless subscribers around the world at the end of Q1 2021 with 79 million of those being added in that quarter alone.  According to the Global Mobile Suppliers Association the number of commercially available 5G devices has just broken past 500 – that means a lot of different people using a lot of different kinds of 5G devices.

How on Earth can we ensure that these devices will be able to communicate with each other and more importantly, do it in such a way that the industry meets societies communications needs while interoperating with other industries spectrum allocations to ensure of no interference?

In 5G Americas’ latest white paper “Mid-Band Spectrum & the Co-Existence with Radio Altimeters,” we address for the importance of 5G spectrum to be harmonized globally across the low, mid, and high bands so that mobile devices can work and communications are not disrupted when traveling between different countries. We also take a look at how internationally, 5G network deployments have been operating successfully without interfering with radio altimeters used in aircraft and helicopters, which the paper explains has been specifically true for the United States for the last several decades.

But first, let’s take a short lesson on wireless spectrum used in 5G networks. Broadly speaking, 5G needs spectrum that covers three frequency ranges: low-band which is primarily used for broad coverage, mid-band which provides a combination of both speed and coverage, and high-bands (or “mmW -millimeter wave”) that provides very fast speeds but usually less coverage. They are summarized here: 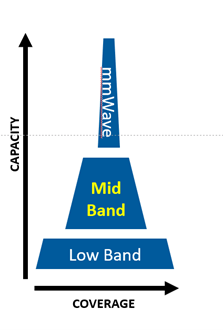 To meet the full potential of 5G you need all three bands to address the numerous new applications and use cases. You need both speed and coverage, so you must have spectrum that will offer the flexibility of providing both depending on what is needed. Having tens of thousands of screaming football fans trying to upload their latest Instagram videos in 4K? You’ll need mid and high-band spectrum – and a lot of it. Trying to make sure that crop sensors can talk to your computer on the rural farm? You’ll need a strong low-band as a coverage layer. For automated driving and smart city applications you might require all three bands.

With this in mind, countries around the world have been working hard to ensure spectrum in these three bands are made commercially available. Globally, 5G networks are growing rapidly due to wide availability of mid-band spectrum, specifically around the 3500 MHz range. Today, there are approximately 105 operators are actively deploying or have launched 5G networks using band 3300 – 4200 MHz (3GPP band n77) or 3300 – 3800 MHz (3GPP band n78). There has also been some interest in deploying 4400 – 5000 MHz (3GPP band n79).

While the United States initially lagged in its mid-band spectrum availability, the US is starting to catch up with other mid-band spectrum leaders around the world, including South Korea, China, Japan, parts of the Middle East and in Europe. In the United States, the Federal Communications Commission (FCC) has taken steps to make spectrum available for terrestrial mobile use which allows for full-power macro-operation in the 3450 – 3550 MHz.  It has also allocated spectrum aimed at enabling 5G services, such as the recent C-band (3700 MHz – 3980 MHz) spectrum auction that was the biggest auction in the FCC history with over US $81 billion in gross bids.

Elsewhere in North America, ISED, the Canadian regulatory body, has also been active in identifying and designating new spectrum for 5G services. ISED is currently auctioning the 3450 – 3650 MHz band. In Mexico, 5G services have not yet been launched, but the spectrum regulator is preparing for 5G. The 3500 MHz band was re-farmed, giving a contiguous spectrum to the three operators (AT&T, Axtel, and Telmex).

So let’s get back to the importance of international spectrum harmonization discussion.

Last year, in the effort to expand the amount of available mid-spectrum, the United States identified approved, allocated and auctioned the 3700 – 3980 MHz band for commercial wireless service. For reference, the nearby 4200 – 4400 MHz band is home to radio altimeters used in aircrafts and helicopters worldwide.

While the federal government released and auctioned this mid-band spectrum without any constraints on 5G deployments and parameters, it later sought additional comment on the spectrum. The aviation industry responded with studies where they felt that mid-band spectrum might produce some interference with radio altimeters.

However, as demonstrated in “Mid-Band Spectrum & the Co-Existence with Radio Altimeters,” these aviation studies have significant shortcomings, including being overly conservative evaluating real-world conditions. In the white paper, 5G Americas produces a review of real-world examples of non-interference in Japan, South Korea, Europe, and with the federal systems in the United States, showing that co-existence of mid-band spectrum and radio altimeters does – and has – occurred. In the case of the United States, military and federal systems have operated near the altimeter band for decades without incident.

There are indeed several other technical flaws involved with the study produced by the aviation industry, including lack of documentation, issues involving the inputs and conditions in the study, inaccuracies in the worst-case performance of the altimeters, as well as worst-case landing scenarios that did not reflect realistic landing conditions. Moreover, the study’s stringent requirements went far beyond what the Federal Aviation Administration (FAA) or even the altimeter manufacturers use for accuracy, thereby leading to more perceived failures.

As someone who regularly travels by air, I can appreciate concerns by the aviation industry – but only when they are valid and substantiated by real world studies based on the latest technology and transparent referenceable information. The US Government, FCC and wireless cellular industry all care deeply about the about best practices for international harmonization of spectrum to ensure positive outcomes for all key stakeholders.

The 5G Americas report provides a thorough review and analysis of mid-band spectrum as well as the how the spectrum interoperates without interference with radio altimeters, I hope you take a look at this great white paper report and make a similar judgement.

Find out more about how internationally harmonized mid-band spectrum helps passengers get the most out of 5G without interfering with aviation instruments.
Click Here