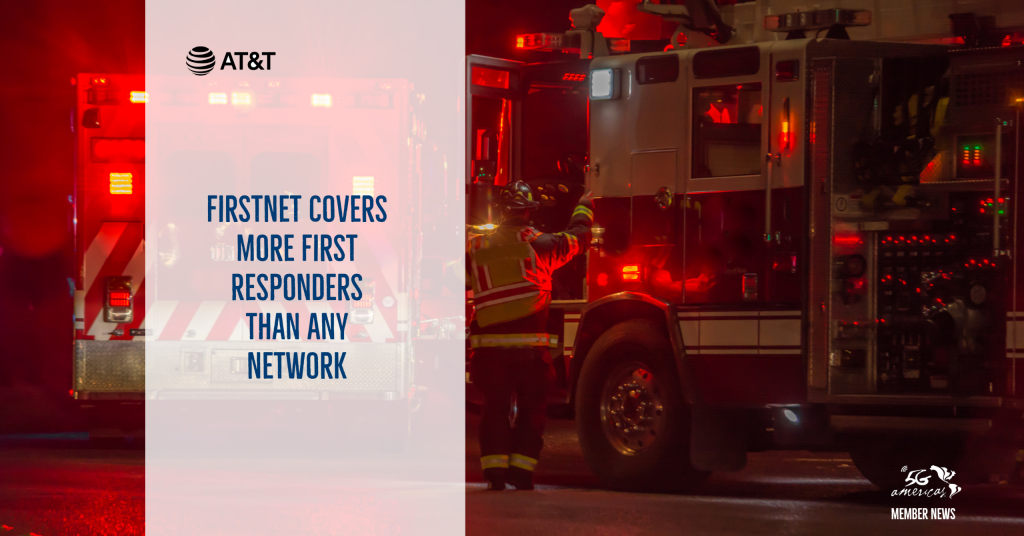 FirstNet, Built with AT&T Now Covers More First Responders than Any Network in the Country

What’s the news? AT&T* is America’s public safety communications partner. In the nearly 5 years since we were selected by the First Responder Network Authority (FirstNet Authority) to build and operate FirstNet®, we have moved quickly to bring more coverage, boost capacity and drive new capabilities for first responders and the communities they serve – rural, urban and tribal. And now the public safety community on FirstNet has access to the nation’s largest coverage footprint, reaching more than 2.81 million square miles across the country. That means we cover 50,000+ more square miles than the largest commercial networks (about the size of Alabama) – giving more first responders access to an entire ecosystem of innovative solutions to keep them mission ready.

We’ve also deployed Band 14 spectrum nationwide. Band 14, public safety’s VIP lane, is nationwide, high-quality spectrum licensed to the FirstNet Authority for public safety specifically on the FirstNet network. In an emergency this band – or lane – can be cleared and locked exclusively for first responders and the extended public safety community. This is vital because, as seen at this year’s Big Game, a first responder used 2+ times more data for their critical communications as compared to a general consumer.

Tens of thousands of communities are benefitting from the unique capabilities of Band 14. Since launching public safety’s network, we’ve upgraded tens of thousands of existing AT&T cell sites with public safety’s Band 14 spectrum, helping to surpass 95% of our Band 14 coverage target with the FirstNet Authority, as well as reaching several hundred thousand additional square miles that exceed our contractual target commitment. And we continue to roll out Band 14 to help provide public safety with dedicated connectivity when needed.

But we aren’t stopping there. The FCC estimates that over 10,000 lives could be saved each year if public safety were able to reach callers just 1 minute faster. And since 80% of wireless calls take place indoors, the need for in-building dedicated public safety connectivity is essential to public safety operations and overall safety. That’s why we are collaborating with Safer Buildings Coalition, the nation’s leading industry advocacy group focused on advancing policies, ideas, and technologies that ensure effective in-building communications capabilities for public safety personnel and the people they serve.

And we know there’s no connection more important than one that can help save a life. In 2021, the U.S. experienced more than 60 extreme weather and climate events coupled with increasing instabilities in the commercial power infrastructure landscape. While we’ve made significant investments to increase network resiliency, these unprecedented events have reinforced the need to take further action for today’s changing environment. That’s why we’re leading the industry by establishing a 3rd “emergency” pathway to each mobility network hub (MTSO). And as public safety’s partner, we’ll continue to set the bar on what success looks like for network resiliency now and in the future.

Further reinforcing the reliability of FirstNet, we’ve gone farther than anyone in the industry to secure public safety’s communications. FirstNet is now the first-ever nationwide network with comprehensive tower-to-core network encryption. And since FirstNet is designed with a defense-in-depth security strategy that goes well beyond standard commercial network security measures, first responders have superior protection without sacrificing usability or impacting public safety’s missions.

Why is this important? In less than 5 years, 56 states and territories unanimously opted-in to FirstNet; we launched the highly secure, dedicated FirstNet network core to give first responders their own connectivity platform; and added so many square miles to the FirstNet service area that it was like we added the entire state of California nearly 3 times over.

Today, FirstNet is solving for common and long-standing communications challenges that first responders face – things like interoperability, network congestion and commercial network providers slowing public safety’s data connection. FirstNet is giving them superior coverage for day-to-day response and life-saving missions. While commercial wireless offerings remain available to public safety, FirstNet continues to grow because it offers distinct advantages from those commercial offerings. FirstNet comes with unique features, functionality and dedicated spectrum when needed for the public safety community. That’s why public safety fought for their own, separate, dedicated platform, championing the vision that led to the creation of FirstNet.‹›

How does FirstNet help bridge the digital divide? Over the past 5 years (2017–2021), AT&T’s total investment in the United States, including capital investment and acquisitions of wireless spectrum, was more than $130 billion. And the FirstNet network expansion is one way we are helping ensure all of public safety – and the communities they serve – have access to critical connectivity to help meet the urgent challenges of today and tomorrow.

We already cover more than 99% of the U.S. population today, but FirstNet is built for all public safety. That means every first responder – career or volunteer; federal, tribal, state or local; urban, suburban or rural, and those that support them. We are working closely with local telecom providers across the country to more quickly address rural and tribal coverage needs and expand the reach of FirstNet for the public safety community. For example, thanks to these collaborations we were able to nearly quadruple our coverage in Nebraska since launching FirstNet. And we’ve deployed Band 14 across nearly 100 cell sites on the Navajo Nation.

And with FirstNet, it’s about where first responders need connectivity. That’s why the build is being done with direct feedback from public safety and local stakeholders. This feedback has been instrumental in deploying Band 14 spectrum nationwide. And it’s helped to launch nearly 1,000 new sites in rural, remote and tribal areas so far – including areas where emergency responses have been previously challenged.

From collaborating with local providers to building out new, purpose-built cell sites in rural and remote locations, this new infrastructure will help improve the overall coverage and network capacity experience for public safety on FirstNet and AT&T wireless customers in the area. Residents, visitors and businesses can take advantage of the AT&T commercial spectrum bands, as well as Band 14 when not being used by FirstNet subscribers.

What makes 5G on FirstNet “one of a kind?” FirstNet is not a commercial network. And that means our approach to 5G for public safety must be different from the way your friends and family experience 5G. With FirstNet, we’re taking the right steps for public safety in a way that meets their unique mission needs. While 5G connectivity will ultimately bring a combination of benefits like ultra-low latency and ultra-high speeds to support all kinds of users, it’s essential we approach 5G in a different way for first responders. That’s why first responders maintain voice communications with priority and preemption on LTE, while the FirstNet network determines the best route for data traffic, whether that’s 5G or LTE spectrum.

What is FirstNet? FirstNet is the only nationwide, high-speed broadband communications platform dedicated to and purpose-built for America’s first responders and the extended public safety community. Shaped by the vision of Congress and the first responder community following the 9/11 terrorist attacks, FirstNet stands above commercial offerings. It is built with AT&T in public-private partnership with the First Responder Network Authority (FirstNet Authority) – an independent agency within the federal government. With more than 19,500 agencies and organizations – accounting for more than 3 million connections nationwide1 – the FirstNet network is providing public safety with truly dedicated coverage and capacity when they need it, unique benefits like always-on priority and preemption, and high-quality Band 14 spectrum. These advanced capabilities enable FirstNet to help fire, EMS, law enforcement and more save lives and protect their communities.

Where can I find more information? For more about the value FirstNet is bringing to public safety, check out FirstNet.com. And go here for more FirstNet news.

What people are saying:

“Interoperable connectivity is the foundation of FirstNet and the entire public safety-centric ecosystem it is driving. As public safety’s partner, we’ve moved faster than anyone to deliver more coverage across tribal, rural and urban areas, powering the connections first responders count on most. And we’re doing it all with a hyper focus on the unique security, resiliency and reliability that their missions demand. Public safety is our priority and we’ll continue to be there for this vital community – no matter where their mission takes them.”

“We are pleased to see FirstNet continue to grow and deliver coverage and capacity where public safety said they need it the most. The FirstNet Authority has taken a public-safety-first approach that is unlike commercial networks. As we head into the 5th year of network deployment with our partner AT&T, we will continue to keep public safety at the forefront of everything we do.”

“The Navajo Nation continues to work with the FirstNet Authority and AT&T to build out FirstNet coverage throughout the Navajo Nation as part of a large collaborative effort to better serve our Navajo people, especially those in underserved areas. Ninety FirstNet towers sites have launched on the Navajo Nation so far, and we’re continuing to work together with the FirstNet Authority and AT&T to get additional sites launched. The FirstNet buildout represents a historic investment in broadband infrastructure for the Navajo Nation. Our first responders have used FirstNet mobile technology during wildfires, large public events and for COVID-19 mitigation efforts. We look forward to expanding our telecommunications capabilities further to provide more resources for our frontline warriors with the help of FirstNet.”

“As weather events intensify and commercial power grids flicker in and out, first responder communications can become less reliable just when it becomes most critical. AT&T recognizes that secure, reliable communications are paramount, and Frost & Sullivan is impressed with the network resiliency measures that AT&T continues to take to help public safety personnel stay connected even under the most trying conditions. One of AT&T’s latest moves, establishing a tertiary link—a backup for a backup—is an extensive process that injects even more reliability and further differentiates AT&T and FirstNet as custodians of Public Safety’s network.”

FirstNet and the FirstNet logo are registered trademarks and service marks of the First Responder Network Authority. All other marks are the property of their respective owners.