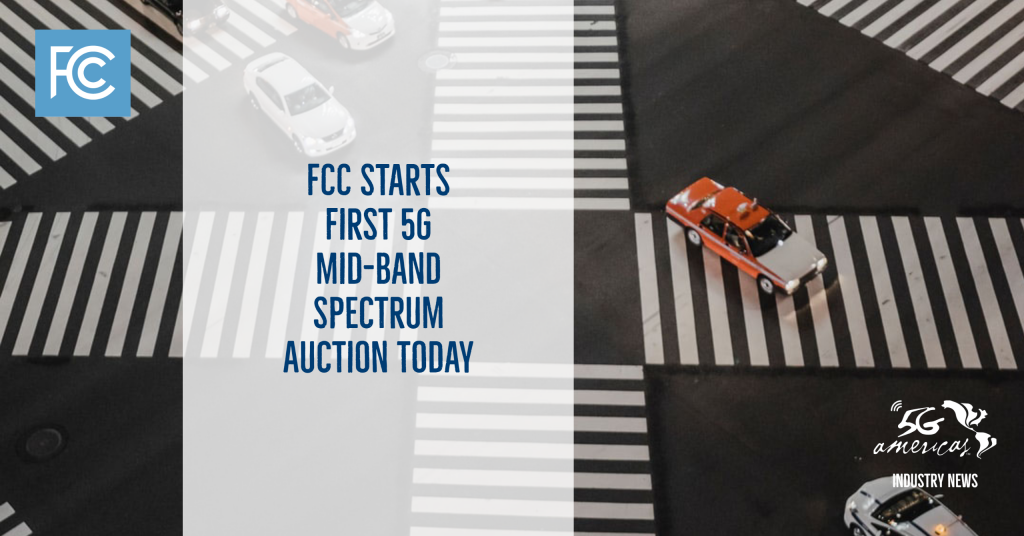 WASHINGTON, July 23, 2020—The Federal Communications Commission today is beginning its first auction of licenses for prime, mid-band spectrum suitable for 5G.  The auction will offer county-based Priority Access Licenses in the 3550-3650 MHz band, which will encourage the rapid deployment of next-generation wireless networks in the band.  This is a critical step in freeing up spectrum for the commercial marketplace—a core part of the FCC’s 5G FAST Plan.

“5G is critical to America’s global economic and technological leadership, and the start of the 3.5 GHz auction today is a key milestone in our work advancing this national priority,” said FCC Chairman Ajit Pai.  “I thank the FCC auctions staff and staff in the Wireless Telecommunications Bureau for their work on this challenging project.  And I especially thank my friend and colleague, Commissioner Mike O’Rielly, for his leadership.  His efforts have helped ensure that we maximize the effectiveness of this auction.”

“Today, we celebrate the door opening to a wide array of potential bidders in the FCC’s CBRS spectrum auction (Auction 105).  After fixing past policy errors, we’re now set to allow auction magic to efficiently allocate 70 megahertz per county for innovative wireless services, making 3.5 GHz the first new 5G mid-band spectrum in the U.S.,” said FCC Commissioner Mike O’Rielly. “I thank Chairman Pai for letting me lead this effort and providing important input along the way.  The Pai Commission, with critical support and initiatives by the Trump Administration, is squarely focused on preserving U.S. leadership in wireless, both domestically and internationally.  Let the bidding begin!”

This auction, designated as Auction 105, will offer seven Priority Access Licenses (PALs) in each county-based license area, for a total of 22,631 PALs nationwide—the largest number of flexible-use spectrum licenses ever made available for bidding in a single auction.  Each PAL will consist of a 10-megahertz unpaired channel in the 3.55-3.65 GHz band.  The Commission adopted procedures for Auction 105 in a public notice adopted earlier this year.

The FCC rules for the 3.5 GHz spectrum band established a dynamic, three-tiered, hierarchical framework to coordinate shared federal and non-federal uses.  Under this framework, incumbent users have the highest priority, followed by Priority Access Licensees, and then General Authorized Access users.  Commissioner O’Rielly led the Commission’s work to ensure that the rules for PALs would encourage investment and innovation in the 3.5 GHz band.  General Authorized Access users can already access the band and the auction represents the final step to commercializing the band. To learn more about and follow Auction 105, visit: https://www.fcc.gov/auction/105