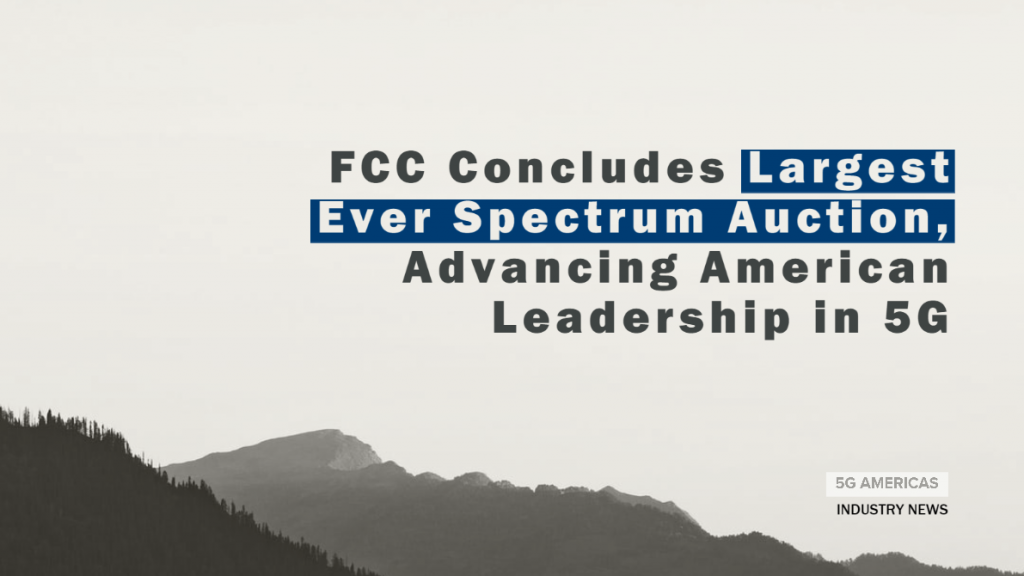 “The successful conclusion of Auction 103—the largest amount of spectrum offered in an auction in U.S. history—is one more significant step the FCC has taken toward maintaining American leadership in 5G,” said FCC Chairman Ajit Pai. “A critical part of our 5G FAST plan is pushing more spectrum into the commercial marketplace.  Last year, the FCC auctioned the 28 GHz and 24 GHz bands.  All told, those two auctions and this one have made available almost five gigahertz of high-band spectrum for commercial use.  To put that in perspective, that is more spectrum than is currently used for terrestrial mobile broadband by all wireless service providers in the United States combined.  Auction 103 was a tremendous success, and we look forward to building on this positive result with the 3.5 GHz auction, which is scheduled to begin on June 25, and the C-band auction, which is scheduled to begin on December 8.”

Auction 103 offered licenses made available, in part, because existing 39 GHz licensees committed to relinquish their 39 GHz spectrum usage rights in exchange for incentive payments determined by the bidding in Auction 103.  The incentive payments for existing licensees totaled $3,084,172,898, leaving net proceeds for the auction of $4,474,530,303.

The FCC is dedicated to ensuring the United States leads the world in the development and deployment of 5G technologies.  As the Chairman noted above, the FCC will take additional steps in 2020 toward this mission.  Later this year, the FCC will hold two mid-band spectrum auctions—bidding in the 3.5 GHz auction begins on June 25, and bidding in the 3.7 GHz auction (known as the C-band) is expected to begin on December 8.  By making more low-, mid-, and high-band spectrum available, promoting the deployment of wireless infrastructure, and modernizing regulations to advance fiber deployment—the three components of the FCC’s 5G FAST plan—the FCC is enabling American consumers to reap the substantial benefits that will come from the next generation of wireless connectivity.

Today’s Public Notice specifies deadlines for payments and the filing of long-form applications, and gives details for other post-auction procedures, including procedures regarding related incentive payments.  It is available at: https://go.usa.gov/xdF4Z.