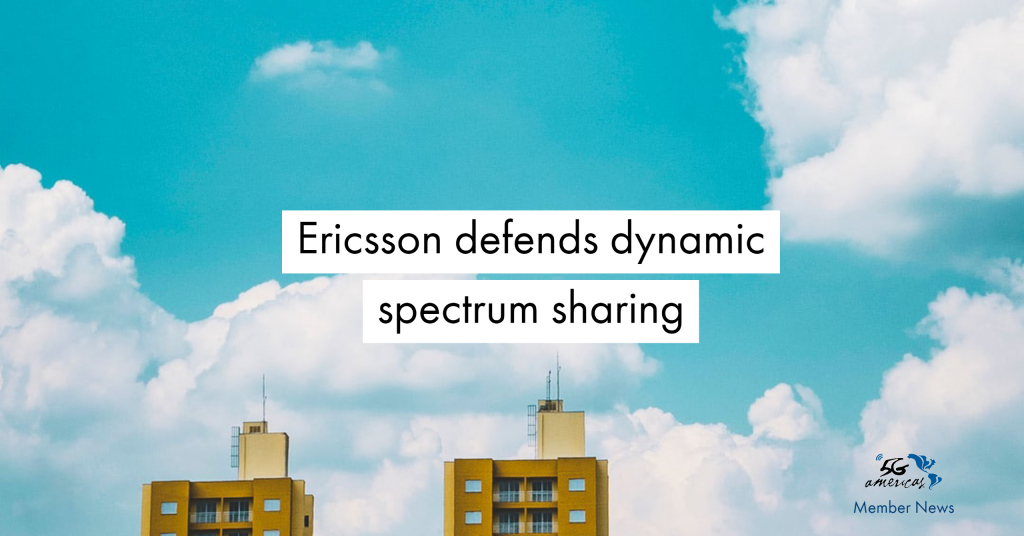 Ericsson today said its dynamic spectrum sharing (DSS) technology is now generally available. Ericsson Spectrum Sharing allows both 4G and 5G to be deployed in the same band and on the same radio through a software upgrade. It dynamically allocates spectrum in the FDD bands based on user demand on a 1 millisecond basis.

Ericsson called out four operators that are using its DSS: Swisscom, Telstra, Ooredoo and Play.

Sibel Tombaz, head of high-band and active antenna systems with Ericsson, said the company has 30 engagements with operators that are trialing and launching its DSS. With today’s announcement, any customer can take the commercially-available software and launch it.

Ericsson Spectrum Sharing software can run on any of the five million 5G-ready radios Ericsson has delivered since 2015. Asked about Ericsson’s work with American operators, Tombaz said she didn’t have specific numbers breaking down Ericsson’s 5G-ready radios around the globe, but “quite a significant part is in the US.”

On its recent Q4 2019 earnings call with investors, T-Mobile President of Technology Neville Ray indicated DSS was running behind schedule, although he didn’t name any specific DSS vendors. Tombaz said today’s announcement of the general availability of Ericsson Spectrum Sharing was on schedule with the road map it had been telling customers. “We delivered from our side,” she said.

Ray also said issues with DSS had come to light, including detriments to spectrum capacity. “We’re seeing as we learn more, that as you deploy DSS it kind of eats away on the net capacity of the shared radio,” Ray said. “If you rush into that now, some of the early rollouts and work arounds…that we’ve seen are pretty corrosive and would suck up capacity just by rolling out the feature.”

Tombaz said if operators want to deploy 5G nationwide on the FDD bands, they have two options: “Go the old-fashioned way and take out certain bands from LTE, or do spectrum sharing.” She said it’s not an apples-to-apples comparison to contrast LTE with DSS. “If you take LTE and you have a certain performance and you want to stay in 4G, that is one case,” she said. “This is the comparison you should make. In our simulations and in field performance, doing DSS is much more efficient than static performance. The user throughout is more than twice.”

In a statement, Ericsson’s Head of Networks Fredrik Jejdling said, “For the first time, our customers do not have to re-farm spectrum before deploying a new ‘G’ and can quickly get 5G on the same footprint as they have with 4G today. In the next 12 months, more than 80% of the commercial 5G networks we support will use our spectrum sharing solution to achieve broad 5G coverage.”

One thing that is holding up DSS is the availability of 5G devices. For instance, Swisscom’s network already has nationwide 5G coverage and the ability to use DSS. “When the devices come, they will be able to use,” said Tombaz. She said the first generation of chipsets for 5G didn’t support FDD and spectrum sharing. But the second generation will, and those devices are expected soon.

According to Tombaz, Ericsson had big plans to show its DSS at MWC Barcelona. “We wanted to show the scale, engagements with chipset vendors, show the live over-the-air-solutions using multiple NR devices and see how spectrum was changing every millisecond,” she said.