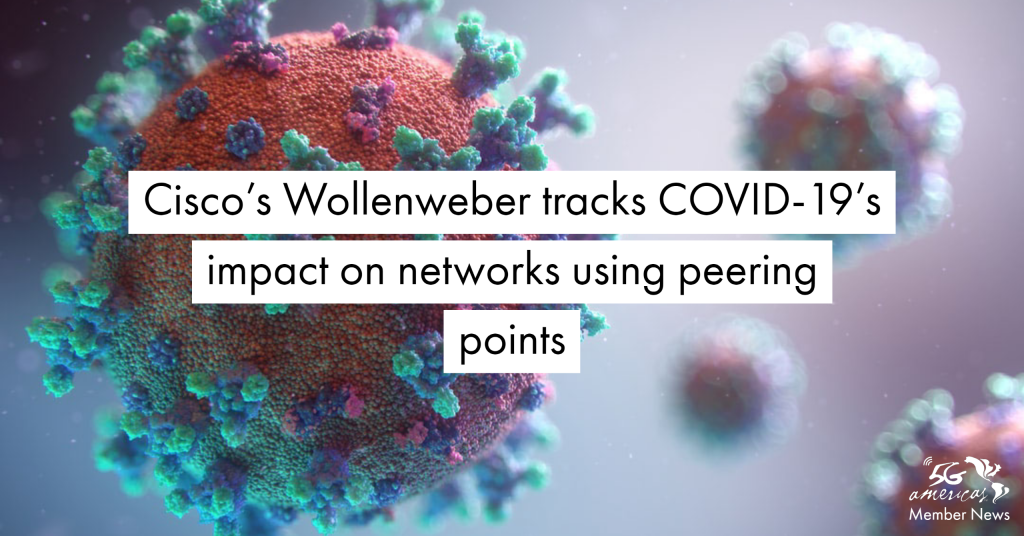 Cisco’s Kevin Wollenweber has turned into a COVID-19 sleuth of sorts over the past few weeks as he tracks the virus’ impact on service provider networks via some of the major internet peering exchanges.

Overall, Wollenweber, Cisco’s vice president of service provider networking, said the world’s networks are handling the increased traffic related to the coronavirus outbreak well. Traffic that was normally concentrated in what was previously peak hours of usage—which are typically after schools get out or in the evenings—has now increased throughout the day due to teleworkers, online gamers, and people streaming high resolution videos.

“I’m in contact with a lot of the large service providers, and I qualitatively have asked how their networks are doing and what they’re seeing on their network,” Wollenweber said. “Most of them have a very similar statement, which is ‘The network’s holding well.’ Obviously, they’re actively monitoring everywhere to find hotspots and looking at where they need to add capacity.

But in general to be able to handle what we just did over the last two weeks and the shift of traffic in these locations, I think the networks are responding extremely well.”

Wollenweber explained why he is monitoring the peering exchanges to keep his finger on the pulse of COVID-19’s impact on networks: “Their data is public and they’ll show you the traffic,” he said. “You can look at it hourly, daily, weekly, monthly, and yearly. The interesting thing is, we obviously saw large spikes, and the spikes follow how they’re how they’re treating the response to COVID-19.”

As one example, Wollenweber cited Telecom Italia, which saw a 70% spike in traffic on its fixed network due to the country being locked down.

“If we look specifically at Italy, when you look at like the Milan internet exchange, which is which is one of the larger ones, we saw basically a 33% increase in traffic when you had the entire country locked down,” he said.

Wollenweber also monitored a Hong Kong internet peering exchange since he couldn’t look at one inside of China.

“We’ve seen things kind of level off a bit as a lot of China has gone back to normal operations,” Wollenweber said. “But if you use them as a barometer, you can expect to see similar things in some of these other countries as more and more people get either quarantined or shelter in place.”

While public peering points provide a good snapshot of impact of COVID-19 on networks as it spreads and wanes, they don’t provide the entire picture. Software-as-a-service cloud providers—Google, Facebook, and Netflix—and content delivery networks (Akamai, Cloudflare, Apple, and Microsoft) are peering privately with the service providers. Wollenweber also noted that some of the internet exchanges tend to run hot, so the increase in traffic is more like 10% instead of the 30% to 40% he sees in other exchanges.

Network traffic is also impacted by outright quarantines or lockdowns versus shelter-in-place policies. Italy locked down its entire population, which meant its citizens couldn’t leave their homes.

As of Thursday night, the U.S. now has the most known confirmed cases of the coronavirus, which also translates to network hotspots emerging in places such as New York City and New Orleans.

“So after watching what happened in Italy, a lot of the U.S. providers are starting to inquire about the augmentation of capacity, and are preparing for more traffic as states have more shelter in place policies or normal people work from home,” Wollenweber said.

The coronavirus outbreak is also driving the use Cisco’s flexible consumption models that it introduced in December as part of its Silicon One announcement.

“We’ve introduced some different consumption models around how our customers can use equipment,” Wollenweber said. “They can basically buy, or put large capacities from a hardware perspective into the network and then license whatever capacity they’re leveraging from that device. As they need more ports, they can actually enable more licenses and turn up capacity faster without having to go in and put new line cards in and do physical installs.

“We’re seeing more interest in flexible consumption models that enable them to kind of move faster and put more capacity into the ground, and more rapidly turn it up as needed. If things slow down, they can dial it back down and turn off ports that they don’t need.”