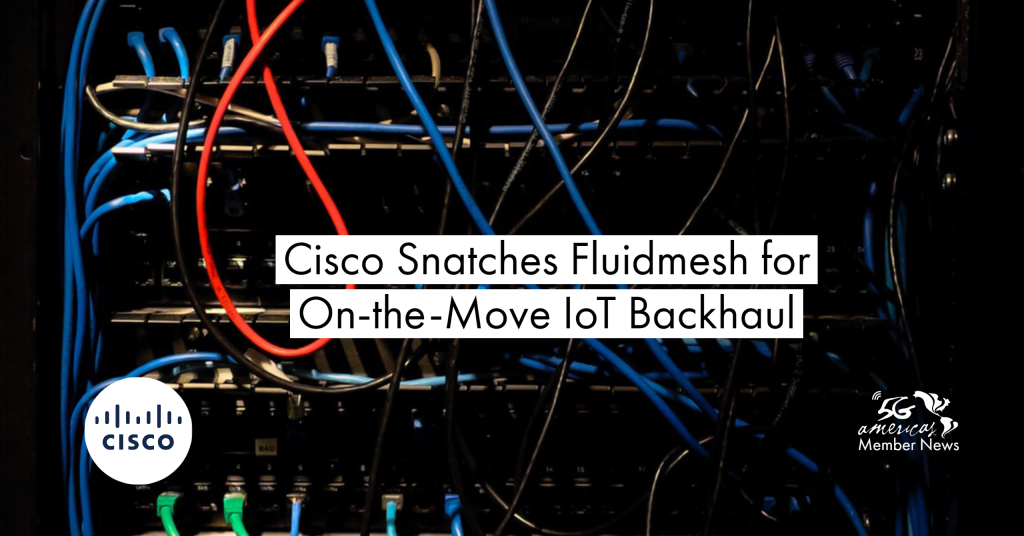 Cisco today announced plans to acquire Fluidmesh Networks, a wireless backhaul vendor specializing in high speed and widely distributed environments, including mass transit, industrial IoT, ports, mines, and factories. The terms of the deal were not disclosed, but Cisco said it expects the acquisition to close before the end of the year, bolstering its IoT business.

The deal also “rounds out Cisco’s capabilities to support IoT use cases that involve the mobility of [sensors] versus static installations,” said Will Townsend, senior analyst at Moor Insights & Strategy.

Cisco describes these as “on-the-move assets and applications” that require reliable backhaul to deliver mission-critical connectivity. Most wireless technologies are better suited for “slow-moving objects” traveling under 30 kilometers per hour, but Fluidmesh’s technology can transmit data at speeds in excess of 300 kilometers per hour, Liz Centoni, SVP for Cisco’s cloud, compute, and IoT business, wrote in a statement.

“This is a crucial step in Cisco supporting the growing adoption and consideration of private networking deployment of LTE and eventually 5G within the enterprise for use cases that are centered on transportation and logistics,” Townsend said.

Many operators and enterprises view 5G as an opportunity to design their respective networks around the applications and operational models they want to support, Bob Everson, Cisco’s global director of mobility and 5G, told SDxCentral during an interview at Cisco Live 2019.

As these network transformations occur, service-level agreements will likely become even more important in a 5G context, Filkins explained. “Bringing Fluidmesh into the fold is likely to help Cisco’s value proposition in this regard, by helping it to monitor and support network performance, and in the scenario for customers not working directly with a service provider,” he said.

“From an IoT standpoint, use cases relying on wireless to deliver mobility are becoming more mainstream. Connecting rail cars, or say a semi truck, which in itself becomes an IoT hub, continue to become more enticing for enterprises to track, monitor and respond to in near real time,” Filkins added. “As such, the demand for a reliable wireless backhaul solution is increasing. A key component of Fluidmesh’s value proposition is its ability to connect mobile, fast-moving IoT endpoints.”

Ensuring data integrity with minimal data loss is of the utmost importance in these scenarios, according to Townsend. “Mobility within IoT brings challenges and this provides Cisco [with a] depth of capability,” he said.

Townsend also noted that Fluidmesh already works with a number of Cisco integrators, which should provide Cisco with a quick route to market.

Earlier this year, Cisco introduced machine learning capabilities and tighter integration between service providers and vendors in its IoT management platform. Cisco IoT Control Center was managing more than 160 million connected devices as of late February, and the company said it’s adding more than 4 million new IoT devices to the platform every month.

At the time, Cisco said it was also incubating specific use cases for 5G IoT with an emphasis on transportation, manufacturing, and smart cities.