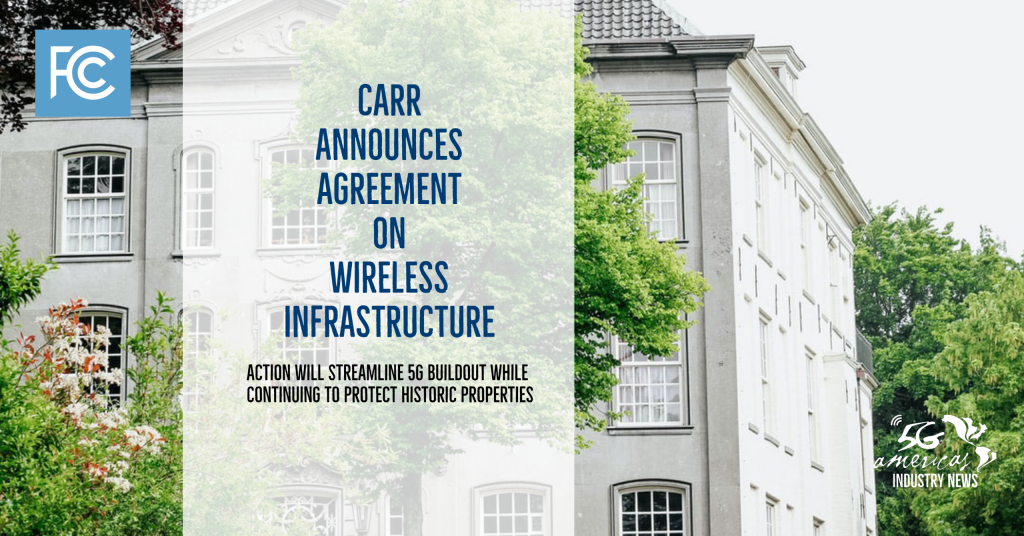 WASHINGTON, DC, July 20, 2020—FCC Commissioner Brendan Carr announced that the Commission, the Advisory Council on Historic Preservation (ACHP), and the National Conference of State Historic Preservation Officers (NCSHPO) have reached an agreement that will support wireless infrastructure builds while continuing to protect historic properties.  It does so by amending the Nationwide Programmatic Agreement for the Collocation of Wireless Antennas (Collocation NPA) that the FCC, ACHP, and NCSHPO entered into in 2001.  The Collocation NPA establishes streamlined reviews for infrastructure projects covered by that agreement.

The amendment updates the review process for collocation (or adding wireless equipment at existing tower sites).  Previously, a collocation project that involved any excavation outside of the current tower site would not qualify for the streamlined review process established by the Collocation NPA.  That conflicted with the streamlined review process that applies when providers are taking down and replacing a wireless structure—a process that allows for deployment and excavation up to 30 feet outside of the existing site.  Today’s amendment resolves that inconsistency by bringing the Collocation NPA into conformance with the tower replacement review.

Streamlining small site expansions is critical to the buildout of 5G and to ensuring infrastructure resiliency.  Providers increasingly are adding mobile edge computing capability and backup power to tower sites, which often require small site expansions.  With today’s agreement, the FCC, ACHP, and NCSHPO are helping to upgrade service while encouraging the re-use of existing wireless towers, as opposed to incenting the buildout of redundant structures.

“This is a vitally important agreement to ensure our infrastructure policies can meet the challenges and opportunities of 5G,” said Commissioner Brendan Carr, who has led the Commission’s wireless infrastructure modernization efforts.  “It represents a commonsense approach to encouraging collocations where tower replacements are not necessary.  The FCC team and our partners at ACHP and NCSHPO worked closely, and I want to extend my thanks and appreciation for the time and good-faith efforts that enabled us to reach this agreement.”

The FCC’s Wireless Telecommunications Bureau will release a public notice concerning the agreement today.  It goes into effect shortly, upon publication in the Federal Register.