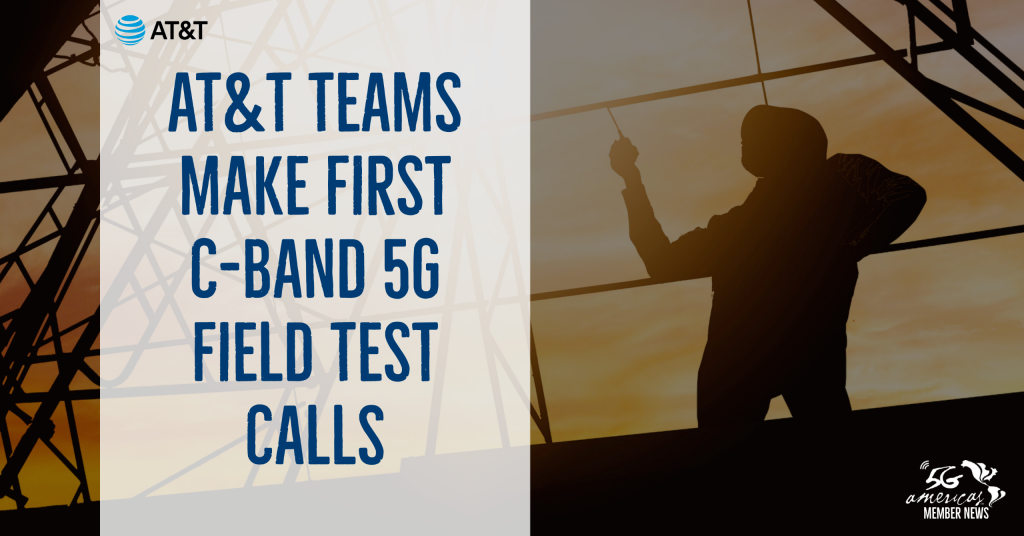 Creating a connection is so much more personal than just devices and networks. For AT&T’s teams who are deploying our 5G network it’s about thinking and working ahead in the race to develop what our customers will need next before they know they need it. That anticipation is what allowed AT&T to be the first to complete field test calls over C-band 5G spectrum using a Mobile Test Platform in Plano, Texas and Detroit, Michigan. Before the C-band auction ended in March, our teams were already planning how to put this new spectrum to the test. That work enabled AT&T to accelerate past the competition –and successfully complete field test calls over C-band, using 5G test devices, only weeks after the auction ended.

“Being the first to make a call on mmWave was an important event in 5G development in 2018,” said Paritosh Rai, who oversees AT&T’s 5G Project Management Office. “Bringing 5G innovation to market is very important to our teams. Working on these C-band field test calls gave us a feeling of, ‘Let’s make history again!’”

“On the cutting edge of technology…”

Recently, we announced that we plan to cover 200 million people with 5G over C-band spectrum by the end of 2023 – well outpacing Verizon’s announced C-band deployment.

“C-band or spectrum will help enable our 5G network to reach its full potential – giving our customers the faster and increased connectivity they want,” said Tony Seyfried – AT&T Tech Vendor Manager, who was leading the team in Detroit on its quest to place the first C-band field test call.

AT&T expects to cover 200 million people with 5G over C-band spectrum by the end of 2023. To make that happen, AT&T acquired 80 MHz of C-band spectrum during the most recent Federal Communications Commission (FCC) auction – the first batch of which will officially become available to us later this year. But telling our field teams to wait that long before taking this new spectrum out for an approved test drive would be like telling a child to wait until summer to play with their Christmas presents.

“This is the type of project you’re really eager to take on because if you’re successful, you’re on the cutting edge of technology – not just for AT&T or our customers, but for the entire industry,” said Seyfried, whose team in Detroit, along with another team in Plano, Texas, led by Rai, were already scoping sites, planning equipment upgrades and engaging our tower partners and radio vendors.

“Our teams anticipated what we would need to make a field tests happen,” said Seyfried. “They took a risk so that we could hit the ground running.”

“We all knew we’d be doing field tests soon and quickly started the leg work in these markets to get sites, software, spectrum and devices ready to test,” said Rai. “Calls are tested in a lab first to work out all the kinks, then that testing is replicated in the field.”

From the lab to the field, testing using a Mobile Test Platform is a crucial component to not only making sure we can communicate over new spectrum but making sure our customers have the best possible network experience possible. But it all starts with those first words.

“Plano is in AT&T’s backyard, so we knew we wanted to secure spectrum here to test,” said Rai. And in the case of Detroit, it was a good location to test coverage that would benefit large business customers.

While the Radio Access Network (RAN) teams designed how the testing would go, the Construction & Engineering (C&E) teams worked on getting potential sites ready, necessary approvals were secured and the 5G Project Management Office worked on clearing the spectrum for the test. All that work happened in parallel and was underway long before the end of the C-band auction. Teams collaborating quickly from coast to coast were closing in on a technological first. The only question: “Which group would be the first to make the first C-band test call? Detroit or Plano?”

“It was a race against the clock,” said Rai. And with both teams working to be the first to make this first test call happen, a little healthy competition emerged – the kind that benefits the teams, the project and in the end, the customer.

“When you have a cross-functional team driving the delivery and we clear one challenge after another, it’s definitely a huge sense of accomplishment,” said Rai. “It’s like a team sport and everyone needed to play their position well in order for this to happen.”

“The agility of these teams is amazing.”

Test calls today are straight forward – filled with more technical jargon than memorable conversation. They’re quite the contrast to the famous line first uttered over the first telephone connection more than 140 years ago: “Mr. Watson, come here, I want to see you.” But more than words, the lasting impact of our successful C-band field test calls – just like Alexander Graham Bell’s call or our pioneering mmWave test call – will be on the next generation of connectivity.

In the end, the team in Plano completed their field test call on Apr. 22, 2021 with the team in Detroit just 10 days later, on May 2, 2021. Success for one team led to success for the another – and in the end it’s our customers who will benefit.

“The speed and agility of these trials were amazing,” Seyfried said. “These tests will allow our teams across the country to test and implement the C-band even faster now, which means our customers will be able to utilize this spectrum sooner. The agility and ingenuity of these teams is amazing.”