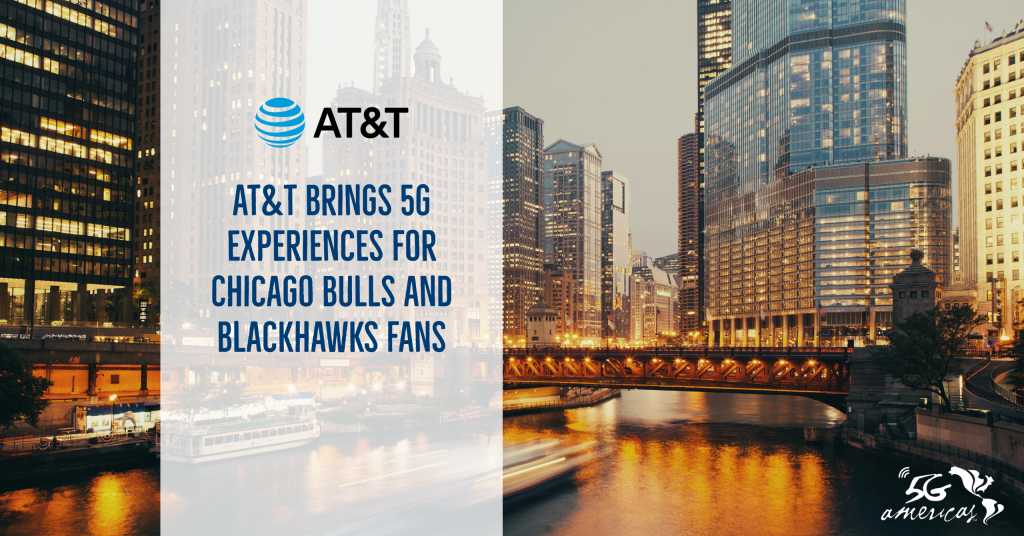 AT&T, the Official 5G Innovation Partner of the Chicago Blackhawks and Chicago Bulls, upgrades fans’ experience with new interactivity at the United Center and in the team apps

As the Official 5G Innovation Partner of the United Center, Chicago Bulls and Chicago Blackhawks, AT&T is bringing new 5G fan-centric, interactive experiences to Chicago this season. Starting with the launch of Pose with the Pros at the United Center – the first shared NBA/NHL arena to implement the technology – and the inclusion of AT&T StatsZoneTM in the Chicago Blackhawks and Bulls mobile apps.

Pose with the Pros allows fans to choose their favorite Blackhawks or Bulls players and mascots to join them on screen for a selfie brought to life through augmented reality. Starting with the Bulls game on December 14 and Blackhawks game on December 15, users can control the two, six-foot AT&T 5G-powered interactive kiosks, installed in the arena’s East Atrium and Madhouse Team Store, through their smartphones. This creates a touchless and safe experience that will leave fans with a unique video or photo to take home. Through the power of AT&T 5G+ at the United Center, fans can also share their memorable moments on social media within seconds.1

For those watching at home, Pose with the Pros is making its way to the Chicago Blackhawks app on December 20 and Chicago Bulls app on December 22. Fans will get the same augmented reality photo-op like they do at the United Center, but from the comfort of their own homes. Fans can explore the features of the app and see the experience in action at att.com/PoseWiththePros https://www.youtube.com/embed/filXSctM3PE?rel=0

”We’re thrilled to bring these experiences to more leagues and to give fans across sports the chance to connect with their favorite teams and players in a more meaningful way,” said Sabina Ahmed, assistant vice president of sponsorships and experiential marketing at AT&T. “Pose with the Pros is a true example of 5G at work and we have more in store for the fans of these legendary teams.”

In addition to launching Pose with the Pros for Blackhawks and Bulls fans, an enhanced AT&T StatsZoneTM will be available in both teams’ official mobile apps beginning early January 2022. With a successful launch in the Bulls app in May 2021, and as 5G and AR technology become more prevalent in sports, AT&T is also introducing StatsZone to the Blackhawks app, expanding the platform’s capabilities and fan experience across both teams through innovative and immersive technology. StatsZone will give fans the ability to see immersive 3D stats immediately, view player and team stats of past games using a customized AR view on their smartphones and share clips of their favorite stats and milestones from the game on social media.

On the heels of the launch of our new, official Blackhawks mobile app earlier this season, AT&T’s StatsZone integration brings additional value to the digital fan experience for our users,” said Steve Waight, Vice President of Corporate Partnerships for the Chicago Blackhawks. “Add to that the exciting launch of Pose with the Pros at the United Center on Blackhawks gameday, and this expanded AT&T collaboration is elevating opportunities for our fans to get to know our team and players whether enjoying a game in person or following along at home.”

“We’re fueling these moments to bring fans closer to the action,” said Jay Cary, VP – 5G Product & Innovation at AT&T. “Our network is packed with speed and capacity to deliver these custom experiences to a stadium near you and to the screen in your pocket. It’s all about creating new, immersive ways to connect you to the teams and players you love while making it all look seamless to you.”

“Teaming with AT&T has allowed us to enhance Bulls fan experiences before, during and after the game,” said Chicago Bulls Executive Vice President, Revenue & Strategy Matthew Kobe. “We’re excited to introduce Pose with the Pros and further AT&T StatsZone to our fans and showcase how the Bulls combine sports and tech to create immersive, unforgettable experiences for fans and their families.”