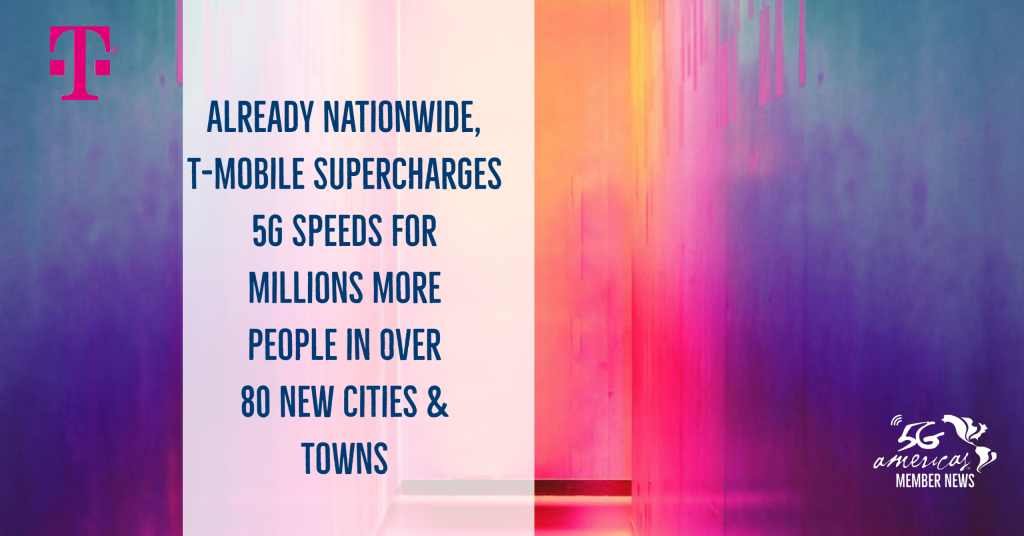 BELLEVUE, Wash. — September 2, 2020 — 5G you can find 0.4% of the time is like a racecar that can’t leave your driveway. T-Mobile’s 5G is the perfect blend of coverage and speed. After launching nationwide 5G last year, T-Mobile (NASDAQ: TMUS) today announced that supercharged mid-band 5G is live for millions more people in parts of 81 new cities and towns across the country, delivering peak download speeds of up to 1 Gbps and average speeds of around 300 Mbps … that’s 7.5x faster today’s average LTE speeds. With today’s announcement, this supercharged 5G experience is live in nearly 90 cities and towns, and the Un-carrier plans to continue lighting up this optimal 5G spectrum at an aggressive pace, reaching thousands more by end of year. And that isn’t just big cities, rural and suburban communities across the country will get to enjoy the benefits of this faster 5G experience too.

“T-Mobile has the competition in the rear-view mirror on 5G, and they’re only getting farther behind. While the other guys are playing catch-up, we’ve had nationwide 5G since last year, and we’re now adding faster speeds across the country with mid-band 5G,” said Neville Ray, President of Technology at T-Mobile. “This is our 5G strategy in action. Mid-band is the 5G spectrum, and T-Mobile has more of it than anyone. We have nearly twice as much low and mid-band spectrum as AT&T and nearly triple that of Verizon. And that means T-Mobile is the only one capable of making the world’s best 5G network a reality.”

T-Mobile has the first and largest nationwide 5G network, covering over 250 million people across 1.3 million square miles — that’s bigger than AT&T and Verizon’s 5G networks combined. Now, with its supply of ideal mid-band 5G spectrum (2.5 GHz), the Un-carrier is building on that nationwide 5G foundation, increasing capacity and boosting speeds for millions of customers. In many places, mid-band 5G average download speeds are already around 300 Mbps with peak speeds approaching 1 Gbps. T-Mobile’s 2.5 GHz 5G delivers blazing fast speeds and expansive coverage with signals that go through walls, windows and trees, unlike 5G networks limited by mmWave spectrum. Each mid-band 2.5 GHz 5G site can cover tens of thousands of times the area that one mmWave site can cover, and can also penetrate obstructions (like walls).

In April following its merger with Sprint, T-Mobile quickly lit up mid-band 5G in Philadelphia and New York City, with Atlanta, Chicago, Dallas, Houston, Los Angeles and Washington D.C. launching soon after. The Un-carrier is continuing to move at lightning speed to bring the companies’ networks together and deliver faster 5G to people all across the U.S. Engineering teams are on track to light up 1,000 sites per month with 2.5 GHz 5G, and by the end of the year, customers will find mid-band 5G in thousands of cities and towns across the country. And this is only the beginning. T-Mobile is continuing to commit more mid-band spectrum to these 5G sites, which means 2.5 GHz speeds and capacity will continue to improve for customers over the coming months and years.

For more information about T-Mobile’s network, visit www.t-mobile.com/coverage. And, follow T-Mobile’s Official Twitter Newsroom @TMobileNews to stay up to date with the latest company news.

5G capable device required; check device specs as not all devices & signals are compatible. Some 5G uses may require certain plan or feature; see T-Mobile.com for devices, coverage, and plan details. More coverage than the other guys combined based on Ookla CoverageRight® data released 8/15/20. Ookla trademarks used under license and reprinted with permission.

About T-Mobile
T-Mobile U.S. Inc. (NASDAQ: TMUS) is America’s supercharged Un-carrier, delivering an advanced 4G LTE and transformative nationwide 5G network that will offer reliable connectivity for all. T-Mobile’s customers benefit from its unmatched combination of value and quality, unwavering obsession with offering them the best possible service experience and undisputable drive for disruption that creates competition and innovation in wireless and beyond. Based in Bellevue, Wash., T-Mobile provides services through its subsidiaries and operates its flagship brands, T-Mobile, Metro by T-Mobile and Sprint. For more information please visit: http://www.t-mobile.com.