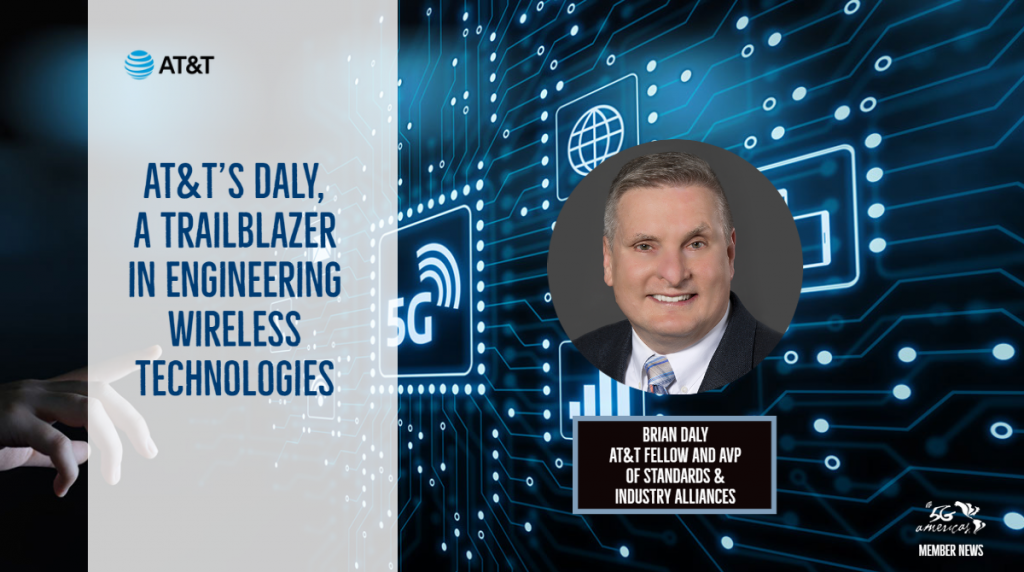 A Trailblazer in the Telecommunications Standards Industry, AT&T’s Brian Daly Engineers Wireless Technologies That Help Improve and Save Lives

AT&T Fellow* and AVP of Standards & Industry Alliances Brian Daly has developed technologies that have made our lives easier and safer.

From our nation’s first wireless emergency alerting system and FirstNet to designing the blueprint for every cellular technology generation since 3G, see how Brian and his team pioneer new technologies at AT&T Labs.

The first nationwide wireless emergency alerting system. At some point in your life, you have probably seen emergency alerts pop up on your cell phone screen warning you of a storm, tornado, or another imminent threat to your safety. More often than not, saving a life is a matter of having access to this critical information – whether it’s from the National Weather Service, FEMA or local government bodies. Then there are Amber Alerts, which we know have saved more than 1,000 missing persons since their inception in 1996.

It’s interesting to know that our wireless emergency alerting system, a service and innovation that we sometimes take for granted today, was launched not too long ago. And did you know that one of the people that made it possible works right here at AT&T?

As head of AT&T’s standards development, Brian Daly and his team are the first to see new innovations, because they create blueprints for emerging technologies. In the aftermath of 9/11, Brian was approached by the FCC when the Congress passed the Warning, Alert, and Response Network (WARN) Act to help develop a public warning system using cellular technology. Brian led the team that identified the technical and operational requirements for this technology, and his plan paved the way for what is now known as Wireless Emergency Alerts (WEA) which launched in 2012.

“WEAs were sent during the Boston Marathon bombing tragedy, Superstorm Sandy, throughout the COVID-19 pandemic, and in countless other emergencies. Knowing that I had something to do with the more than 70,000 WEAs that have been deployed to inform and protect people in times of crisis over the past decade, and the fact that 123 children have been found thanks to WEA-delivered AMBER Alerts is one of the greatest rewards of doing what I do at AT&T.”

Soon after launching the service, Brian quickly got to work on driving the industry standards needed to deliver the alerts in both English and Spanish and add device-based geofencing, so alerts are sent based on the device’s known location.

Each enhancement brings a layer of complexity that Brian and his team face, including enabling AT&T to send out alerts without overloading the network: “When you send a time-sensitive emergency alert to potentially millions of people, you need them to receive it so they can take action, but you also need to make sure the network stays running so if someone needs help it will be there for them,” said Brian Daly.

To this day, Brian continues to provide his expertise to government agencies like FEMA, the National Weather Service, the U.S. Geological Survey, and state, local and tribal agencies.

Designing public safety’s network. Brian was involved in the early development of industry standards for the nationwide public safety network, which also has roots back to the aftermath of 9/11. After AT&T won the bid to operate the FirstNet®1 network in an unprecedented public-private partnership in 2017, Brian’s experience and work hit even closer to home.

“What makes FirstNet unique is that first responders now have nationwide, mission-critical, always-on priority connectivity. Communications interoperability or the lack thereof was a lesson learned from 9/11. The FirstNet platform helps with that, and it also allows for advanced services and “apps” to be developed and delivered on FirstNet Ready® devices.”

He continues to support public safety needs through organizations such as the Association of Public Safety Communications Officials (APCO). Working in close collaboration with the First Responder Network Authority (FirstNet Authority) government standards team, Brian and his team are key players in implementing key functionalities. This includes work supporting Mission Critical services (Push-to-Talk (PTT) voice, data and video), Proximity Services (ProSe) with direct communication among public safety devices with and without the aid of a network, relay services, and support for Land Mobile Radio (LMR) to LTE services interworking. With an outlook on what’s ahead, they continue to innovate and work on making the technology behind big ideas that support first responders possible.

Brian is also a volunteer for the FirstNet Response Operations Group. As a volunteer, he is trained to deploy a dedicated FirstNet Satellite Cell on Light Truck (SatCOLT). One of the most memorable moments for Brian is getting hands-on with the technology contained in a SatCOLT, raising the cell tower, pointing the satellite dish, and preparing the equipment for first responder use. That not only gives him hands-on experience with the technology but also challenges him to think creatively on what’s next for FirstNet standards.

3G to 6G: pioneering what’s next in mobile technology.It’s hard to picture life today without the ability to send an email, stream a movie, catch up with friends on social media, download your favorite app, or shop online on your mobile device. 3G introduced the ability to send text messages and basically surf the web on cell phones. Fast-forward 20 years, and we are now doing so much more with America’s most reliable 5G Network.2

Developing each wireless generation, from one G to the next, typically takes years of research and preparations. And it all starts with standards development. Brian has been involved in the development of digital cellular technology since the early days of Personal Communications Services (PCS). Brian also invented the enablers for “intelligent roaming.” This invention earned Brian his first patents and was deployed across networks and mobile devices allowing AT&T customers seamless domestic and international roaming.

Brian not only led the development of 4G but also helped drive its global standardization. Unlike today, there was not an international standard with developing 3G. In the United States, the Telecommunications Industry Association (TIA) was the main standards body, and that fragmentation demonstrated the need to come together globally to support a common standard. In the late 1990s, 3GPP was formed, with the Alliance for Telecommunications Industry Solutions (ATIS) being the North American partner. This led to the beginning of 4G technology, the first “worldwide” standard and is the reason why we have global roaming today.

Another difference between how technology is created today versus back then is the number of participants in the ecosystem:

“I always joke that our technology group back then fit in one conference room. Today, things are much more complex. We have many vendors to deal with, many of which are those we are not their primary customer. Internally, we have many teams to interface with, get input from, and develop our standards roadmaps. Just like the network itself, the job has grown.”

Brian helped to develop AT&T’s vision for 5G and is passionate about unlocking its full capabilities. He admits that he continues to be amazed by the technology advancements over the past 20 years. What was a voice service grew to texting and has evolved to apps, social media, and multimedia streaming services. The technology evolution marches, on and Brian is excited for fully immersive experiences like AR/VR and AI – technologies that will then be used to enable so much more, from autonomous driving to drones and others that will make life easier and safer. And he is an active user of technology – Brian recently passed his FAA Part 107 Remote Pilot certification enabling him to fly drones to gain a better understand how standards can support their operations.

Brian is a trusted expert in the industry providing his expertise to numerous organizations like 5G Americas, ATIS, the Next G Alliance, the O-RAN Alliance, and others. Brian is a member of the FCC’s Technological Advisory Council (TAC) and Communications Security, Reliability & Interoperability Council (CSRIC), advising the FCC on issues such as 5G/6G, Security, AI, Antennas, and emerging technologies. He has written whitepapers on topics ranging from the evolution of 5G and open source for 5G to the future of wireless voice communications and integration of cellular and Wi-Fi technologies, to cybersecurity and critical infrastructure protection, as well as how government agencies can use 5G technology.

Like his fellow technologists, Brian is always thinking 5 to 10 years ahead. The work on 6G has already begun and is leading the industry and AT&T’s technological journey to the next wireless generation. He is an active leader in the Next G Alliance which recently published the “National 6G Roadmap,” building on his and AT&T’s legacy as an innovation leader through the next decade.

Brian holds over 180 patents, and his vision and leadership have led to the innovation of lifesaving and life-enhancing technologies.

“I started with McCaw Cellular in 1995 which became AT&T Wireless, then Cingular and then the AT&T of today. We are a much bigger organization now with many more stakeholders. But one thing has not changed – the caliber of talent. We have the brightest minds in the industry, and I learn something new from them every day. For anyone who wants a career in technology, don’t keep your ideas to yourself. We are always seeking out new ideas, and this is why AT&T is a great place for innovators.”

Brian is part of many industry groups including the Executive Committee of the National Spectrum Consortium where he’s co-Chair of its 5G Working Group. He holds working group chair roles in ATIS, the O-RAN Alliance, GSMA North America, and 5G Americas, as well as various roles over the years in TIA, NENA and AFCEA. He has received numerous awards including the 2010 LTE Americas award for “best contribution to LTE standards in North America”, the 2012 NG911 Institute Industry/Private Sector Award for “leadership in emergency communications,” the ATIS President’s Award and the ANSI Meritorious Service Award and many others.

* The AT&T Fellows Honor is bestowed on individuals in the AT&T technical community who have made sustained and notable contributions through scientific and technical achievements that have significant impact to AT&T’s business.

1 FirstNet and the FirstNet logo are registered trademarks and service marks of the First Responder Network Authority. All other marks are the property of their respective owners.