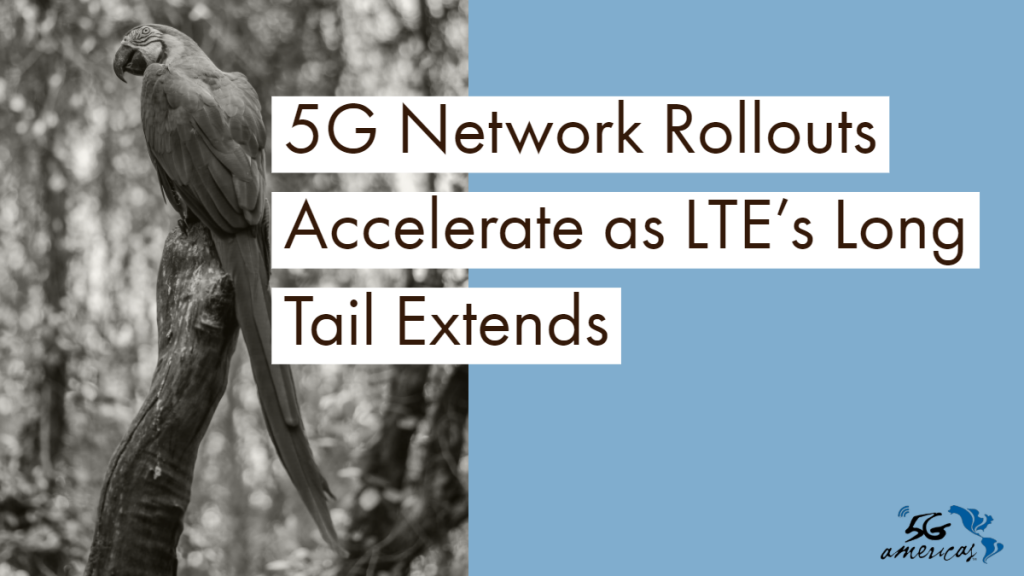 BELLEVUE, Wash. – September 19, 2019 – Nearly a quarter billion new LTE connections were added around the world in the second quarter of 2019, according to 5G Americas, the wireless industry trade association and voice of 5G and LTE for the Americas, and based on data from Ovum. Global LTE subscriptions are quickly approaching five billion worldwide as operators continue to invest in LTE-Advanced and further evolutions of LTE. This reflects LTE’s roadmap of innovation and increasing capabilities as LTE is expected to continue its subscriber growth through 2021 amid the deployment of new 5G networks.

There are currently 34 3GPP standardized commercial 5G networks globally, and it is anticipated that there will be 77 commercial 5G networks by the end of 2019, according to TeleGeography. The uptake of 5G by has only just begun. Ovum’s forecast predicts 156 million 5G connections worldwide and 32 million in North America by end of 2021.

Chris Pearson, President, 5G Americas said, “We’re coming out of the gate with the excitement of 5G networks in 2019. However, network operators in many regions of the world are continuing to build out 4G LTE infrastructure at a rapid clip to provide excellent mobile broadband service to their customers.”

North America continues to lead the world in LTE market share. LTE represents 88 percent of all mobile connections in North America as of June 2019, which is up from 82 percent in June 2018. The Oceania, Eastern and South Eastern Asia region has the second highest market share for LTE at 73 percent, up from 65 percent in June 2018. Western Europe follows with 55 percent (up from 48 percent), while Latin America and Caribbean continues to see strong LTE subscriber growth, up to 47 percent (from 35 percent) during the same period.  Market share represents the percentage of mobile wireless connections that are LTE technology versus all other mobile cellular technologies.

“LTE continues to increase the number of new connections while networks are continuously being enhanced with new technology,” Pearson remarked. “The innovative technologies which underpin 5G performance will also improve 4G LTE networks through the foreseeable future.”

Looking forward, data from Ovum estimates that by 2023, global 5G connections will grow to 1.3 billion representing 13 percent of all worldwide wireless subscribers.

Within the United States and Canada, LTE connections reached 459 million in Q2 2019, which represents 88 percent market share of all wireless technology connections. It also reflects the addition of 13 million new connections between March and June of this year and demonstrates continued LTE subscription growth of 14 percent year-over-year.

Kristin Paulin, Senior Analyst at Ovum, stated “North America is one of the leaders in 5G network deployments and we will witness substantial momentum in 5G subscribers starting in 2020.”

Across Latin America and the Caribbean, LTE continued to see strong subscriber growth, reaching 324 million – which reflects nearly 19 million new connections in the quarter and a 32 percent increase over the twelve-month period. Across the region, LTE market penetration per population reached 47 percent, which is up from 44 percent in the first quarter 2019 and 35 percent in the second quarter of 2018.

By 2023, Ovum forecasts LTE connections will grow to more than half a billion in the region. At the same time 5G technology is expected to reach 75 million connections.

According to Jose Otero, Vice President of Latin America and Caribbean, 5G Americas, “LTE growth remains strong in Latin America with several countries surpassing the 60 to 70 percent adoption rate. In the coming years, we see LTE expanding its coverage into less densely populated areas while 5G starts to be adopted in urban centers and the enterprise segment.”

Otero further stated, “The good news for 5G is that several Latin American governments consider the technology as having a pivotal role in their digital transformation strategy, hence they are trying to make the necessary regulatory changes to spectrum assignment and network deployment rules to accelerate its deployment and adoption in their jurisdiction.”

Ovum forecasts suggest worldwide LTE connections will approach 6 billion by the year end 2022, then decline to 5.7 billion in 2023, still far ahead of 5G’s 1.3 billion subscriber connection count in the same year.

According to deployment data from TeleGeography, IoT deployments based on the LTE standard (NB-IoT and LTE-M) continue to increase. Global Networks as of September 13, 2019 (source Telegeography):

For more information and to view a variety of statistical charts on the 3GPP family of technologies, and for a list of LTE and 5G deployments by operator, by region visit www.5GAmericas.org. Subscriber and forecast data provided by Ovum and deployment data by TeleGeography (GlobalComm).

5G Americas is an industry trade organization composed of leading telecommunications service providers and manufacturers. The organization’s mission is to advocate for and foster the advancement and full capabilities of LTE wireless technologies and their evolution to 5G, throughout the ecosystem’s networks, services, applications and wirelessly connected devices in the Americas. 5G Americas is invested in developing a connected wireless community while leading 5G development for all the Americas. 5G Americas is headquartered in Bellevue, Washington. More information is available at www.5gamericas.org or Twitter @5GAmericas.