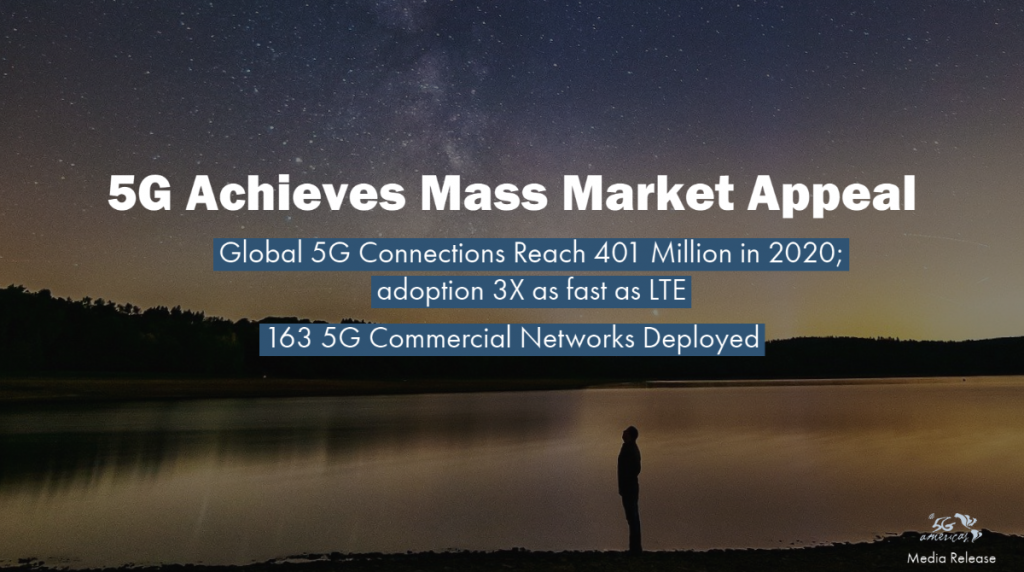 BELLEVUE, Wash. – March 25, 2021 – 5G networks are now nearing a critical mass of global commercial network deployments and subscribers, suggesting a rapid upward curve of technology adoption over the next few years, according to 5G Americas, the wireless industry trade association and voice of 5G and LTE for the Americas.

According to data provided by Omdia, the world added 385.5 million 5G subscribers between Q4 2019 and Q4 2020 to reach 401 million 5G connections globally, shrugging off the challenges of a global pandemic and economic headwinds. As of December 2020, the fifth generation of wireless (“5G”) powered ahead at three times the adoption rate of subscriber growth as 4G LTE, which required a full five years to reach the same level of subscriber acceptance, which represents a 2500 percent increase in subscribers over last year. The number of 5G connections is expected to reach 619 million globally by the end of 2021.

Chris Pearson, President, 5G Americas said, “5G is in its early stages of fulfilling its full potential, as the industry has just finished the second inning of a nine-inning baseball game. In the second full year of commercially available 5G, the industry went from 15.4 million to 401 million subscribers. The uptake of 5G connections will accelerate significantly over the next few years.”

From a commercial availability standpoint, an additional 105 5G networks went live globally in 2020, bringing the total up to 163 5G networks. The number of commercial 5G networks is expected to reach 277 by the end of 2021, according to data from TeleGeography. The growing availability of 5G-enabled devices has also blossomed, with the Global Mobile Suppliers Association (GSA) noting there are now 628 5G devices announced, of which 404 were commercially available by the end of February 2021.

With 5G just beginning in Latin America and the Caribbean, the region saw 6340 5G subscriptions added in the year of 2020. In contrast, LTE continued its strong growth, ending Q4 2020 with 407 million LTE subscriptions (13% YoY growth).

According to Jose Otero, Vice President of Caribbean and Latin America for 5G Americas “”Two elements can contribute to the proliferation of new commercial 5G networks in Latin America and the Caribbean. First, the increased availability of 5G-ready devices, especially for fixed wireless services. Second, governments’ efforts to accelerate the launch of 5G networks that include spectrum assignment processes, 5G incubator projects, spectrum auction announcements and incentives for 5G trials.”

The number of networks using 4G and 5G wireless technologies are summarized here, as of March 2021:

In addition, please join 5G Americas for a free webinar on April 13, 2021: 5G in the Factory and on the Road, focusing on 5G’s impact on the transportation and manufacturing industries.